HISTORY OF CORNWALL SQUARE: return to A LANDMARK DESTINATION 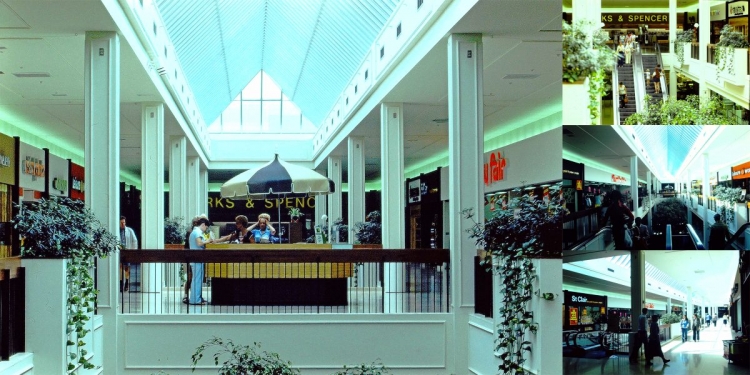 Between 20,000 and 25,000 people jammed the Cornwall Square when it opened to much fanfare on October 3, 1979. Boasting the first escalators in the Untied Counties, management even stationed guides to instruct people how to ride them safely. Home to 49 stores, in 250,000 square feet of retail space, the Square was anchored by Steinberg’s grocery to the east and Sears Canada to the west. When the parking lots are included, the whole complex covered nine acres of former retail, hotel, industrial, park and religious space.

Viewed at the time as a dynamic way to retain shoppers in Cornwall, and make the downtown vibrant in the face the expanding Brookdale and Eastcourt Malls, M.P.P. George Samis added that the Square was “Designed to keep in Cornwall much of the estimated $25,000,000 being spent annually in shopping centres in Montreal and Ottawa (and) is part of Cornwall’s new progressive image.”

The City’s goal to change the aging face of lower Pitt, Sydney and Water Streets was, to some minds, too successful.

To make the parking garage, it was necessary to demolish St. Paul’s United Church, which had stood at the corner of 1st East and Sydney streets from 1875 to 1978. A plaque, now gone, was placed on the garage commemorating the church, while the steeple adorns the extended covered entrance way at the Best Western Hotel.

Horovitz Park was truncated, spelling the end of the band shell and swimming pool along with the closure of Halliwell Tire, which had been on Sydney Street since 1919.

The face of Water Street was changed forever when Cornwall Street Railway’s car barns were removed to make way for the Square’s southern parking lot and entrances.

The East side of south Pitt saw the demolition of such established businesses as Moffat Printing (Astro), Bringloe’s Furniture, Pearson’s Dance Hall, and the venerable, if somewhat seedy Lloyd George Hotel, which had opened around 1888 as the Clifton and then the Duquette.

And this an incomplete list of the buildings lost.

Remarkably of the 49 businesses and services that started out in the Square – Coles Books, Laura Secord, Peoples Jewellers, Shoppers Drug Mart and Tim Hortons still call it home with Canada Trust now reduced to an ATM machine and Hickory Farms to a Christmas kiosk.

The Square started as the launching pad for Rob McIntosh China, now in Lancaster while Reitmans and Algonquin travel moved.

Technology made some stores such as Astral Photo and Flipside Records obsolete.

Changing buying habits reduced the five shoe stores to one and impacted on successful businesses like Godard’ Stationery, which once had three Cornwall locations and now has none.

Over time, Steinberg left to be replaced by a discount grocery store which in turn became a Dollarama.

Cornwall lost a little bit of England when Marks and Spencer closed.

Sneaky Pete’s Restaurant on the first floor was replaced in 1989 when the Square was modernised with the second floor food court.

While other retailers such as Tip Top, Penningtons, Stokes and Orange Julius left, the largest change occurred when Sears closed on October 3, 2017, after exactly 38 years of operation. The loss of this anchor was a casualty of the chain’s bankruptcy, which saw dozens of its stores close across Canada.

I am sure everyone has fond memories of Sears; I can still conjure the taste and aroma of their cafeteria’s chicken pot pie, enjoyed while viewing Lamoureux Park from their picture window.

The years had not been kind to the Square and in October, 2021, the locally owned Weaving Basket Group purchased the facility that originally cost $21 million, for $8.4.

Aware of the significant role the Square has played in the development of the downtown core, Tom Hughes, the Group’s Vice-President said that they plan to once again turn it into a “landmark destination”.

We hope you have enjoyed this trip down the “Memory Lane” of Cornwall Square and if you have any suggestions for other places in Cornwall that you would like Ian Bowering to discover, Please email us at: info@theseeker.ca

ALSO – if anyone has a photo of “Sneaky Pete’s” please email it over as we can’t find any photos of that restaurant – thanks!

Thank you Ian It sure brought back a lot of good memories. I worked at the square back when it was built It was a time that we now call it “Square Days” , sure hope they can revive it .