Down the Rigaud River with a Paddle 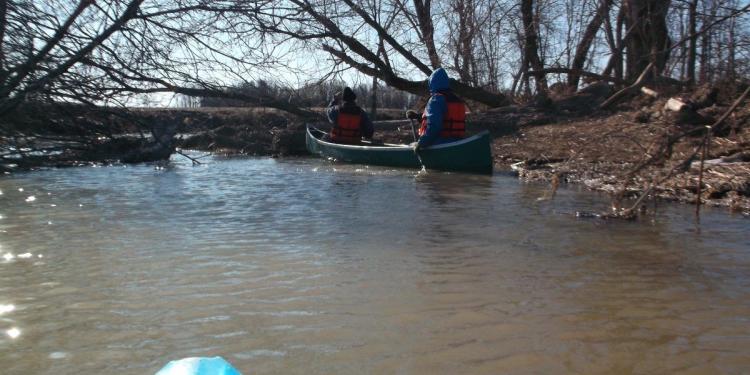 The first portage. The shallow draft of my kayak (blue bow to prove I was there), meant that I could ease myself over the shallow water and not have to portage.

The winter was long and forced me to stay more physically inactive than I like, so when I heard about the Rigaud River Spring Canoe (and kayak) outing, scheduled for Saturday April 2, I threw common–sense to the wind and decided to take part.

Much more sedate than the Raisin River Race, this event was staged after a two year Covid break by Robert Irwin and the Vankleek Hill Canoeists, as a fundraiser for the Dalkeith Historical Society.  As an aside I asked Robert how long the course was, and should have been warned by his vague answer.  On the map, the route looked relatively short, that is until you took into account the numerous switchbacks the river makes between the “outing’s” starting point at Lochnivar and Tannery Roads, North Glengarry to Robertson Mills, just south of Dalkeith.  Assured that I didn’t need to worry I expected to be on the water for an hour at the most; I was wrong.

Starting at around 9:30, I gently paddled my way through rural Glengarry, passing scenes that would not have been out of place 75 years ago.  The first portage was easy, as I could nudge myself over it, while a fallen tree at the second one forced me to portage.  Still, only half an hour into the trip, and the wind behind me, and the sun shining all was good.  Even the first couple of rapids were easy, and the encouragement from onlookers on overhead bridges welcoming.  Somewhere into the second hour and after negotiating more rapids I passed under a third bridge and asked one of the spectators, who congratulated me on my progress, how much further?   When he replied I was half-way, I finally realised what I had gotten myself into!

Now as I paddled down the river, the rapids became a little longer and more aggressive with large boulders being all too present.  Near the end of the second hour I saw a turkey buzzard circling overhead, and began to hope I wasn’t lunch.  I kept going, as there was no alternative, and then I saw the CNR bridge and knew the end was close.  Well nearly, another 10 minutes and finally, Robertson Mill, with tables brimming with hot food and coffee. I had made it, without even getting wet!  And while it wasn’t a race, I felt good about having been the third to make arrive.

AND UP NEXT – The Raisin River Canoe Race taking place next Sunday, April 10th – and no, I will not be taking part in that one – only maybe as a spectator!!!

The Rigaud River starts south of Vankleek Hill and runs east to the Ottawa at Rigaud, Quebec.

Historically a working river, the Rigaud’s waters powered a sawmill and various other mills at the picnic landing, settled by John Robertson and his wife Janet McKay from Dalkeith Scotland.   This led to the creation of a small village, that  was  flooded every spring.  To overcome this yearly event, the settlers placed their homes on logs and hauled them up the hill to the present location of Dalkeith.

The river continued to be used for the spring timber run until the 1940s.

The Robertson – Clark general store, dating from 1867 now serves as the home of the Dalkeith Historical Society’s museum.