by Mai-Liis Renaud
in Columns, News, Out and About
Reading Time: 5 mins read 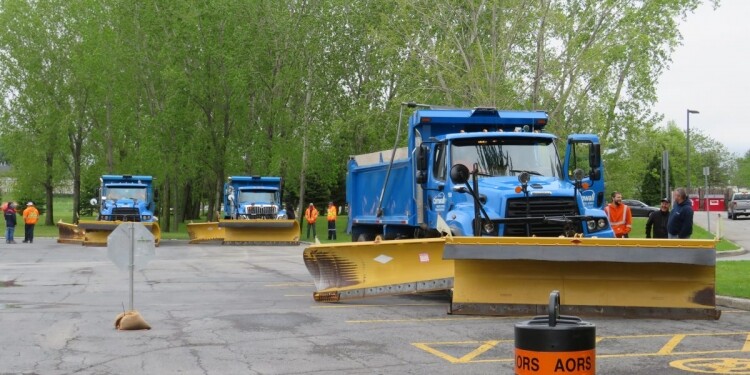 Could this be why it was so cold and damp this morning?

But seriously, yesterday The Seeker received a media release from Francis Racine at the City with an invitation to visit the east parking lot at the Cornwall Civic Complex at 9am where the City of Cornwall would be hosting the Eastern Ontario Road’s Association snow plow truck rodeo.

Even through my eyes don’t usually open til 10am (LOL) this media release peaked my curiosity so I decided to make myself presentable at an earlier than usual for me time and head out to see what this event entailed. Stepping out the door to chilly weather I thought to myself, all we need is snow and a Snow Plow Rodeo would be perfect today! I secretly anticipated Gabe of Your TV to be out there with a bucket of snow, however when I mentioned the “S” word, everyone, including these 2 guys above who were at the entrance of the event, gave me the response of Noooooo even though everyone out in the parking lot were visibly feeling the effects of the cold and chilly day while waiting for the Rodeo to start.

The first person I talked to was Tommy Sauve, Safety Training and Operations Supervisor for the City of Cornwall as well as being the President of the Eastern Ontario Road Supervisors Association who gave me a quick run down of what this event was all about as well as walking me through the course that the 25 participants (snow plow drivers) would have to navigate and would be graded on.

This events has been held for over 12 years but this was the first time in 3 years (due to Covid) that it has actually taken place with drivers coming from all over SD&G – 4 representing the City of Cornwall. The course is quite tricky to navigate with tight corners, areas that they have to back up in a tight space and all the pilons representing parked cars that they have to go around of course without touching any of them.

Every move the driver makes is graded by 7 judges and the driver with the highest points will get to go to the national competition in the fall that is hosted by the City of Napanee.

There is also a Pre-Trip Snow Plow truck that has been set up with 8 defects that each driver has to point out.

Tommy and some of the judges pointed out to me that this event is not about speed but about “Safety”. Above are two of the judges going over the rules.

I hear a lot of people complaining (on Facebook) during the winter about snow plough drivers and the state of winter roads but I wonder if any of these people have ever sat in the seat of a snow plow and seen the panel of buttons, levers etc. that a snow plow operator is faced with every time they go out. I had the opportunity to sit at the wheel today and it was like looking at the controls of an airplane and at the same time visualizing that the operator has to also be conscious of their surroundings when they are out clearing the roads so being a snow plow driver is not the easiest job especially when there is a huge snow fall and they have to work long hours to make the roads clean and safe for us to drive on! Remember they are clearing and salting at the same time.

Tommy Sauve told me that in the Spring of 2024 the Provincial Rodeo and Trade Show will be held here in Cornwall so we have this huge event to look forward to.

I definitely know though that Snow Removal would not be a job for this Seeker Chick as the climb into the cab of the truck was challenging enough as is the fact that my eyes would definitely have to be open before 10am !!!

How to write an excellent sales manager resume?