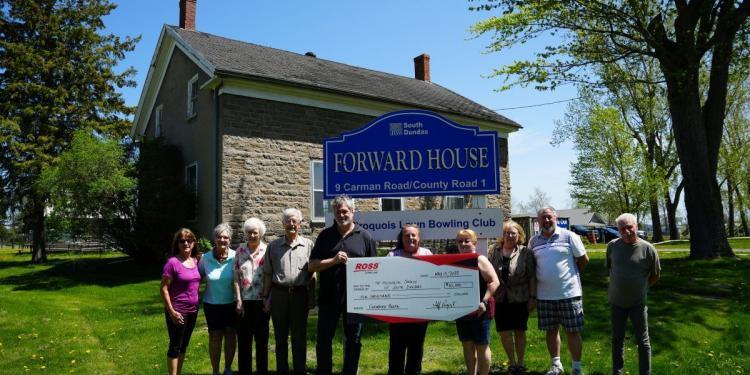 Ottawa, Canada – May 31st, 2022 – As a leading employer in Iroquois, Ontario, Ross Video is delighted to help save a building that represents the foundation of the town upon which the company was built. Instead of facing demolition, Forward House, which was constructed around 1815, will now become a symbol of Iroquois history and a gathering place for the community. It’s something that makes Ross Video CEO David Ross both proud and nostalgic as he considers the town his childhood home.

“We donated $10,000 to help save this building because it’s an opportunity to maintain the special character of Iroquois that originally attracted my father to the town,” says David. “Ross Video and the Ross family have a long history of contributing to projects that have a positive impact on the local community and this a worthy project to protect something that is irreplaceable.”

Forward House was originally built in advance of a planned British fort that ultimately wasn’t needed after British forces won the War of 1812. According to local historians, it’s one of only three buildings that survived the construction of the Seaway from 1955 to 1958 and the demolition and relocation of the old village of Iroquois. The Historical Society of South Dundas is leading the effort to save and preserve this historic house and put it to good use for the community.

Donna Plant, Interim Vice President of the Historical Society of South Dundas (HSSD), comments, “The HSSD is grateful to Ross Video for their generous donation towards the safeguard and renovation of the Forward House in Iroquois.  With this gift, Ross Video leads by example in support of protecting the unique heritage of South Dundas and building community through the power of history. Thank you, Ross Video!”

Forward House will become a tearoom and gift shop combined with the Tourist Information Centre and home for the Historical Society of South Dundas. It will house an extensive collection of historical artifacts.