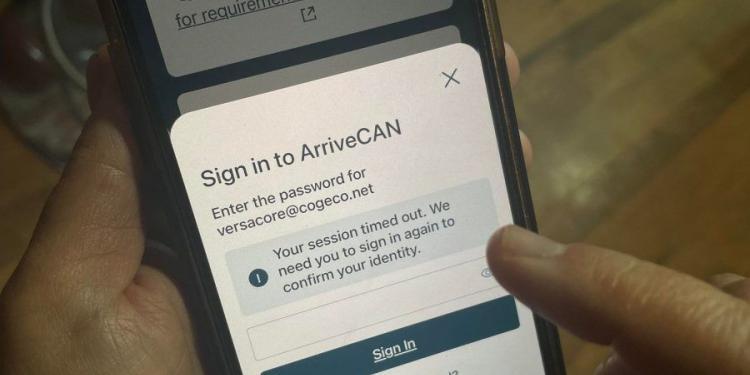 Local Member of Parliament Eric Duncan (Stormont-Dundas-South Glengarry) is demanding the federal government immediately scrap the problem-ridden ArriveCan smartphone app process, along with the permanent removal of all federal travel restrictions and mandates.

“Our local constituency office has received countless calls and emails from constituents who are having horrendous experiences with the ArriveCan application,” said Duncan. “Seniors who don’t have smartphones or are not comfortable with technology are overwhelmed with the process, and many are just wanting to cross the border for lunch in Massena or to visit the Casino after two years of restrictions.”

“Canadians have experienced various glitches when using ArriveCan and then receive threatening messages of fines of $5,000 or more. It is absolutely ridiculous, and this daily chaos needs to stop immediately. The federal travel restrictions and the use of the ArriveCan app are unfairly and unnecessarily punishing Canadians who simply want to get back to their normal lives,” continued Duncan.

It has been reported to Duncan’s office by numerous local residents returning to the country that children under five, who are exempt from testing and quarantine requirements, are being told to self-isolate upon their arrival at the border due to a glitch in the system. Those glitches have still not been resolved months later, and government officials have been continuing to advise families to create new email and ArriveCan accounts each time they cross the border.

“The tourism industry is finally hoping to see a recovery this summer travel season, but the federal government is standing in its way,” stated Duncan. “By doubling down on requiring the mandatory use of the ArriveCAN application, the Liberal government is actively discouraging travel to Canada.”

Recently, a group of Canada-US border Mayors and tourism business leaders spoke out against the federal government refusals to scrap the Arrive Can app. In reaction to growing frustration at airport wait times and a drastic increase in cancelled flights, the federal government suspended the proof of vaccination requirements, while still requiring the ArriveCan app to be used at all ports
of entry, including land borders. The federal government also announced that a paper ArriveCan form would be available as an option.

Duncan concluded by making the case for immediate changes. “The Liberals need to listen to these valid criticisms and acknowledge there is no need for ArriveCan to be mandatory to complete when returning to Canada, and with so many glitches and complaints, it needs to be scrapped. Canadians have been more than patient with the rules and restrictions during the pandemic. It’s time to make it easier to travel, end all federal mandates permanently, and let Canadians live their lives again without threats of charges and fears of being fined.”