by Editorial Board
in News and Announcements
Reading Time: 2 mins read
22 1 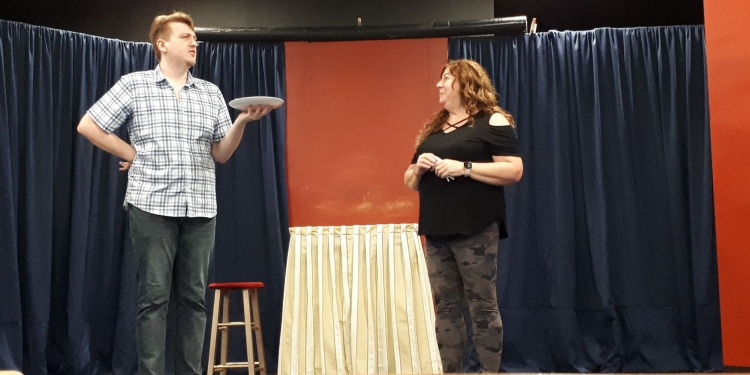 A comedy by Norm Foster

The Seaway Valley Theatre Company is currently at work on the first show of their 2022-2023 season, the aptly titled “Opening Night.” A witty, fast-paced love letter to the theatre by Canada’s most produced playwright, Norm Foster, the show will play for a run of nine performances at the Seaway Valley Theatre beginning Friday, September 16th.

Ruth Tisdale, (Laurie McRae-Bingley) a theatre lover, wins a pair of tickets to the opening night performance of a new play. She drags her husband Jack (Greg Taylor) along with her to celebrate their 25th wedding anniversary, but he’d much rather be at home watching the seventh game of the World Series on TV. Comedy ensues as they mingle with guests in the VIP lounge, including the show’s cynical director, (Grant Reso) his needy girlfriend, (Véronique Lacroix) and a motley assortment of actors. (Neil Carriere, Mike Chatelain, Michael DeWolfe, and Bethany Lynn.) It all peaks with the “performance” of what’s got to be one of the worst plays ever written.

Making their debuts as co-producers are Josée Julien and Cheryl Snider. Sitting in the director’s chair is longtime SVTC member Marion Barnes.

“Opening Night” will be staged on September 16, 17, 23, 24, 30 and October 1 at 7:30 PM. Matinées will also be performed on September 18, 25 and October 2 at1:30 PM. All performances will be at the Seaway Valley Theatre, 30 Sixth Street East, Cornwall. Reserved seats are $25.00 and can be bought in advance online at svtc.theticketwicket.ca or by phone at 613-933-3998. They will also be available at the door from one hour before curtain time. The venue is wheelchair-friendly and features a cash bar.

For more information, visit www.svtc.ca or the company’s Facebook page. Be sure to follow the hashtag #SVTCOpeningNight on social media, too.