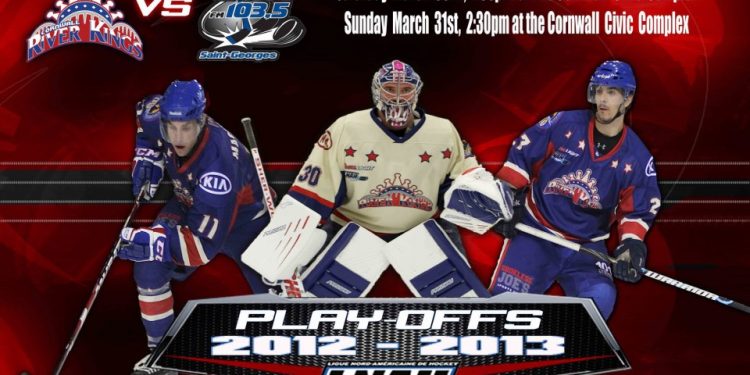 Cornwall Ontario — The Cornwall River Kings made history tonight winning their first ever playoff game at the Civic Complex Ed Lumley Arena. Cornwall began the playoffs on the right note defeating Saint-Georges 3-1 at home Saturday night to take a 1-0 playoff series lead. Éric Meloche opened the scoring for Cornwall. Saint-Georges tied the game early in the third, but then Nicolas Corbeil scored the go ahead goal for Cornwall. Francis Lessard put the final nail in Saint-Georges coffin scoring with about thirty seconds left in the game. Loïc Lacasse had an outstanding game stopping 25 of 26 shots. Go Kings Go!

Update, here is the press release sent to media:

Cornwall is up 1-0 in their first ever LNAH playoff series after a 3-1 win over St-Georges at home. The penalty killing units got the job done tonight not allowing a single goal in five tries by the Cool FM.

The first playoff game in franchise history had a first period that saw both team size each other up and play pretty safe. Alex Bourret got the fans on their feet with a clean bone crunching hit on Louis-Philippe Lachance, who lay on the ice for almost 10 minutes after. He went to the dressing room and would later return before the end of the period. Twenty minutes of hockey yielded a 0-0 score with St-Georges outshooting the River Kings 14-9.

The River Kings can thank their penalty killing units in the second for successfully killing four Cool FM power plays, and three of those were almost all back-to-back. It would be the Kings on their only power play of the frame who would score when St-Georges goalie Jeremy Duschesne misplays an Eric Meloche dump in into his own net.

Just 2:07 into the third period St-Georges tied thing up at one on a goal by Pierre-Luc Laprise. The River Kings would then retake the lead at 5:50 on a bullet from Nicolas Corbeil at the tail end of a power play. The River Kings looked in control the rest of the frame outshooting St-Georges 16-5 in the third. Francis Lessard would seal the win with an empty net goal with :34 seconds to go. He would then drop the mitts with Dave Starensky just seconds after the next face off. The three stars were Lessard (third), Corbeil (second) and Bourret (first).

Game two of this first round series goes tomorrow afternoon at 2:30pm at the civic complex. The complex box office opens at 10:30am.