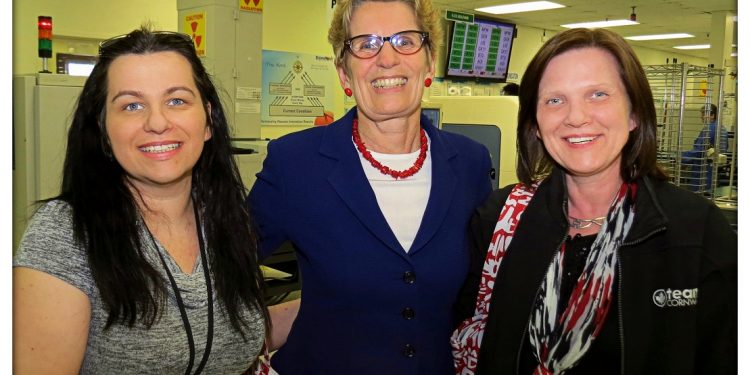 “We are committed to helping local economies grow. That’s why we are working with businesses labour and education partners in Cornwall and beyond to ensure that our people have the right skills for the global economy”, says Wynne.

The province has provided $3.5 million in funding to the Cornwall area through the Eastern Ontario Development Fund, and it is estimated that funding has helped retain more than 700 jobs.

After the round table, Wynne was presented with a Team Cornwall jacket by Gilles Latour and Mayor Bob Kilger. Then she was given a tour of SigmaPoint Technologies where she met employees on the job. After the tour she answered questions in a media scrum.

Reporter Jason Setnyk had the opportunity to ask three questions to Ontario Premier Kathleen Wynne. Here are the three questions and Premier Wynne’s answers in their entirety:

1 – Premier Wynne, according to a new report from the Mowat Centre, Ontario contributes more than what it gets back for transfer funding. How are you going to address this issue?

I am very much an advocate for a fair equalization process across the province. My predecessor Premier McGuinty made that point across the country. I am going to be making that point with my colleagues, we need an evidence based formula for contributes to equalization. We are as Ontarians are happy to contribute to confederation. We want to be good Canadian citizens but we also want to be able to deliver high quality services and supports for the people of Ontario. I am going to be making that case with my colleagues. We have the Council of the Federation this summer in Ontario, and I will be chairing that and I very much look forward to my conversations with colleagues across the country.

2 – Premier Wynne, can you tell us about your working relationship with Cornwall Ontario City Councillor Bernadette Clement? Do you think she should run for MPP in the next election?

It has been a pure pleasure working with Bernadette (Clement). Some of you will know she was one of the moderators of all the (Federal Liberal) leadership debates. She did the Francophone component of the Leadership debates. It was just wonderful to work with her, and she served on my transition team. She brought a really important perspective from Eastern Ontario and from the municipal sector. She was very good at putting that municipal lens on the issues that we talked about and the impact on the things that we were talking about on municipal councils. Bernadette’s future in politics, I hope is long and bright.

3 – Premier Wynne, the Ontario Liberal government’s relationship with teachers became fractured in Dalton McGuinty’s last year. Will you be able to mend fences with teachers?

First of all let me say that my predecessor has laid a terrific foundation in the education system in Ontario. When we came into office there was a lot of issues that needed to be tackled: class size, the realities around collective bargaining, the fact that we didn’t have an Early Childhood Education system really in place, we’ve added that, full day kindergarten. We’ve made a lot of changes. The graduation rate when we came into office was 68%, it is now 81%. We’ve made a lot of changes to support and help young people to succeed, so I am really proud of the work that we did. There was in the last year obviously a process in place that kind of fractured the relationship. I have always had a strong relationship with the education sector. I am determined to keep that in tact and I believe that we are well on our way to re-establishing that respect back. I was in a school today in Kingston. I had the opportunity to meet with some students and with some teachers. The teachers in that school and the students are very happy their extra curricular’s are back, and be able to have their track season for example, be able to have their prom and graduation. So to me that is what is really important, what has happened in the last eight weeks, is that young people are able to experience at the end of the year the full range of activities at school.

Thank you Premier Kathleen Wynne for answering The Seeker’s questions.

After the media scrum Premier Kathleen Wynne met and spoke with more constituents including two women entrepreneurs (and owners of the Seeker) Julia Lucio and Mai-Liis Renaud.

“It was truly an honour to meet the first ever female Premier of Ontario. As a woman, it is always encouraging to see our peers in leadership positions. Mrs. Wynne showed a genuine interest in her constituents”, said Lucio.