City of Cornwall Erecting Banners to Celebrate War of 1812 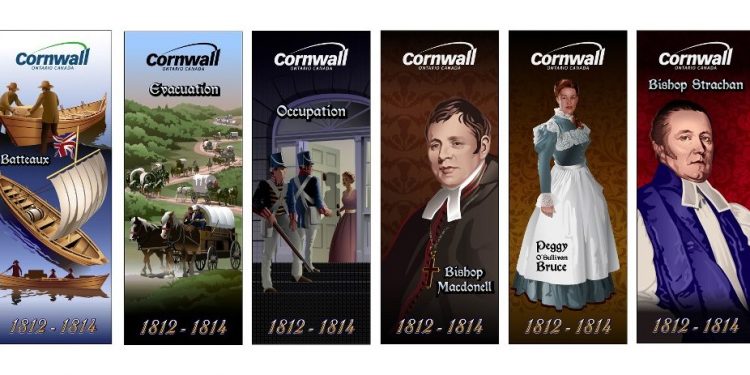 Cornwall Ontario — Residents will notice a change to the streetscape in Cornwall’s commercial areas with the arrival of new street banners highlighting local events and figures from the War of 1812.

The colourful banners are replacing existing City banners on Water Street and in the Downtown and Le Village areas. Installation of the new banners is currently underway.

“The War of 1812 was a pivotal conflict in Canada’s history, and Cornwall played an important role in this event,” said Mayor Bob Kilger. “With these new banners, we hope to raise awareness of an important chapter in Cornwall’s history.”

“Some of the best War of 1812 stories centering on Cornwall occurred in 1813,” said Bob Peters, Senior Development Officer. “These stories are quite interesting, and we hope local residents and visitors will take the time to find out what happened 200 years ago.”

A few weeks ago, the Cornwall Community Museum published a War of 1812 booklet, and a number of other local events and initiatives are being planned for later this year.

The banners recognize the following events and figures from the War of 1812:

Batteaux
The Batteaux banner recognizes the importance of the St. Lawrence River for the movement of goods and supplies between Montreal and Kingston during the War of 1812. Batteaux were a common sight in Cornwall during the conflict. Every soldier, sailor and weapon needed to fight the war in Upper Canada passed through Cornwall.

The Evacuation of Cornwall
Cornwall’s main supply depot was located between the present day location of the Clock Tower and Cornwall Community Museum in Lamoureux Park.  With notice of the invading American force in November 1813, a decision was made to move the military stores out of Cornwall to a more secure location.  Militia loaded the military supplies and other government stores onto 150 wagons and departed Cornwall. This wagon train travelled by way of St. Andrews and Martintown to the defensive post at Coteau du Lac, east of Cornwall.

The Occupation of Cornwall
On the morning of November 11th, 1813, American cavalry occupied Barnhart’s Island (just west of the RH Saunders Generating Station), and the western end of Cornwall.  The village was undefended, except for a small scouting party of Stormont Militia and St. Regis Warriors. In Cornwall, American officers occupied farm houses while the men bivouacked in the field. Facing only women and children, the invaders were “civil and quiet” however they didn’t hide their desire to lay waste to the town and countryside before proceeding to Montreal.  On November 12th, after learning of the defeat of the American forces at Crysler’s Farm, the occupying forces retreated and left the City.

Bishop Macdonell
Bishop Alexander Macdonell, known as the “Big Bishop,” was the first Roman Catholic prelate of Upper Canada. Also known as the “Warrior,” he helped raise the Glengarry Light Fencibles, the predecessors of the SD & G Highlanders, and according to tradition, he urged on Canadian forces in the attack on Ogdensburg in 1813.

Peggy O’Sullivan Bruce
Peggy O’Sullivan Bruce operated the St. Andrew’s and St. Patrick’s tavern on First Street near Pitt Street. When invading American soldiers asked how to get to Martintown to find the retreating British forces, she gave them directions but implored them to be careful as the woods were full of British Regulars, Glengarry militia and St. Regis Indians. There wasn’t a soldier or an Indian within miles but the Americans did not know that and they gave up the intended attack.

John Strachan
John Strachan was influential clergyman, educator and the founder of the Cornwall Grammar school. Following the invasion of York (Toronto) in 1812, the newly arrived Strachan went to the American flagship to request an end to looting and burning by American forces. Strachan’s will power and personal presence was so strong that it was later said that it was difficult to tell who was the conquered and which the conqueror. Strachan is credited with helping save York from destruction.

Additional information on Cornwall’s role in the War of 1812 can be found on both Cornwall.ca, and ChooseCornwall.ca.

1st Annual Cornwall Ontario Stride for Breath is on May 11th