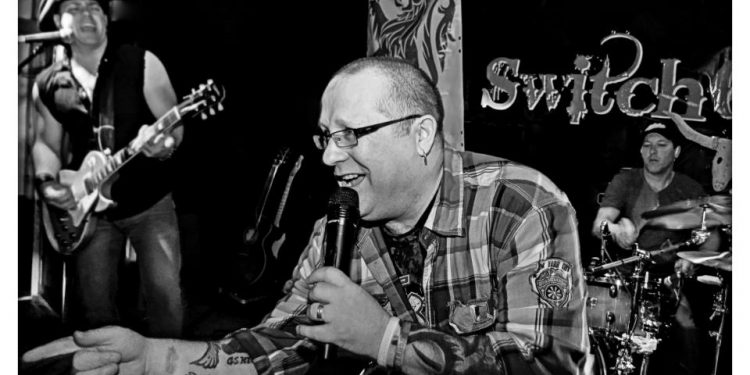 Jamie Jarvo who grew up in Cornwall Ontario is a professional singer and songwriter of ten years. He is the owner of Jarvo Entertainment, providing karaoke and DJ services for different events. He is a husband and a father of two. He is also the lead singer of Switchgear. Hailing from Cornwall Ontario, SwitchGear broke into the country/rock scene in 2010. Their debut CD entitled “Country in the City” is available online at Itunes. Some of SwitchGear’s notable showcases include opening for the legendary Burton Cummings and Suzie McNeil at the Kinsmen Lift-Off Festival and at Cornwall Ribfest. Switchgear have many concerts booked this summer including opening for Emerson Drive on June 22nd at the Maxville Fair, opening for Dean Brody at Cornwall Lift-Off on July 13th, and opening for CCMA’s Greg Hanna at Cornwall Ribfest on July 28th.

Switchgear are also one of the five finalist for the Seeker Music of the Year Award – Find out who wins Friday June 28th at the Golf and Country Club. Tickets are on sale now!

Jamie Jarvo answers five questions for The Seeker. This interview was conducted by Jason Setnyk

1 – What are the origins of the band Switchgear, how did you guys come together, where did you come up with the band name, and the concept to perform country / southern rock music?

SwitchGear was a vision that came together after corresponding with childhood friend Jason Sauve. He was living in Calgary and I had heard some of his music online and reached out to him to send me some things to try and work together. We did that for about a year sending tracks back and forth online. Eventually Jason and his family decided to move back to Cornwall and we got together to start the process of putting a band together. We recorded into the late hours of the evening at a local school while trying to get the right mix of people for the band. We went through a few different line ups with some great musicians who because of work commitments couldn’t remain with us. Finally we found Scott Reasbeck as a free agent from another band and he joined us settling in beside Jason on guitars and they compliment each other very well. Then we found bassist David Allen through a mutual friend and finally to solidify our rhythm section, Scott suggested a former band-mate in Kirk Wallace and SwitchGear was a solid five. The band name was something that Jason had used in Calgary. At first he wasn’t sure it was the name for us but I couldn’t keep the name out of my head. Just something about the name that stood out for me and eventually Jason said yes that’s our name. The concept of the band was hard to map out at first since all of us in the band come from a heavier rock influence, but we wanted to be different and from my experience with Karaoke. I noticed a huge shift in country music especially newer country with it’s rock influenced guitars and thought that would be a great fit for us. I had seen he popularity of the genre explode and so this is what we decided the avenue for us to go. We also noticed that locally especially nobody else was doing this type of stuff.

2 – Switchgear’s song “No Love” was broadcast on the television show “All for Nothing” and appeared on the Oprah Winfrey Network. Tell us the story behind all that.

The Oprah thing was just perfect timing for us. I had a friend from High School, Al Charbonneau, who contacted me about this show his friend Christine Giroux was participating in for the W network and Oprah network. He thought our band would be perfect to help raise the most money for her. They had asked local tavern La Maison for the venue and we agreed to play, giving her the proceeds from the door along with raffles and other things. We were told the crew from the show All or Nothing would be there filming but had no visions of ever making it on the actual TV show. The night of the filming La Maison was at full capacity all night, and the night was a great success. Christine ended up winning the show and on the night of airing we sat down to watch the show, and in an unreal experience there we were – SwitchGear on national TV! Needless to say I was doing quite the couch dance. It was one of the highlights for us as a band in the last year and a half of being a band.

3 – What is creative process behind writing a Switchgear song? Furthermore what was the concept behind your first album?

The creative process in writing a Switchgear song is pretty simple actually. Jason usually writes all the music and a lot of the lyrics, and I help with the hooks a phrasing. The first album was a lot of work on Jason’s part because he had a lot of stuff written before he got here. So we got together and worked on them long hours to get them to fit into the Switchgear sound. We usually start with a guitar track and then build the song around that. I would describe our sound as new country with rock guitars. Our concept for our debut album was to write really catchy tunes, solid riffs and heartfelt lyrics. The album has some really fun songs like With Her Boots On and Country in the City some really good anthems like Oh What A Feeling and No Love, and some powerful ballads like One More Kiss and even a nod to old country with the song Gypsy Smile. On the follow up album the whole band is getting involved in the writing process and so far the songs are coming along really well. Our first single from it is titled Tanlines. I think this is going to be a fun song people will really enjoy.

4 – Your band has played a series of charity gigs, including a spaghetti dinner for the Agape Centre, and a fundraiser to help a local person get an MS procedure. There are a lot of generous bands in town who give back to the community. What are your thoughts on playing charity concerts?

Charity shows are very important to us. We wish we could say yes to every one that comes along, but sometimes bookings don’t allow us to do that. The Rock for Charity shows mean a lot to us so we try to do as many as we can. The Agape is another important organization in our City that we really wanted to help with. I really believe that the musical community in Cornwall can do amazing things together when we join forces. It amazes me the level of high quality talent this City has musically. I’ve had the pleasure to play in bands with some amazing musicians and jam with a ton more. SwitchGear tries to help out as much as we can allot our time to these causes. Any way that us and all other local bands and artists can do to get together and help raise money for charities I’m positive we will do. The caring musicians have for our City and for charity is undeniable.

5 – In the Fall of 2012 Switchgear released the music video “With Her Boots On!”. Tell us the story about creating that music video.

The concept for our video for “With Her Boots On” was a joint effort with us and our director Shaun Ryan of Playmaker Studios. We wanted to have a video that had some elements of what it’s like to be at a SwitchGear show, plus we wanted to have some Cornwall landmarks in the video as a way of saying thanks to the City for being so great to us and being very proud of being from Cornwall. So in the video you see some fans going out to a club and being a little bored of it when they get a text saying a Switchgear show is happening at a barn party. So they hop in the car and drive through the City to get to the show and what ensues is a great night of dancing and fun. We had a great time doing the video but it was a very new experience for us and took getting used to especially doing take after take. We are doing the storyboard for our next two videos which will be filmed this summer.

Thank you for this interview Jamie Jarvo. I hope you and the band Switchgear have an amazing and rocking summer!

Visit Switchgear online to listen to samples of music, and for a full list of upcoming concerts:http://www.switchgearband.com/

The Sweet Science of Boxing