by SeekersAdmin
in News and Announcements
Reading Time: 2 mins read
22 1 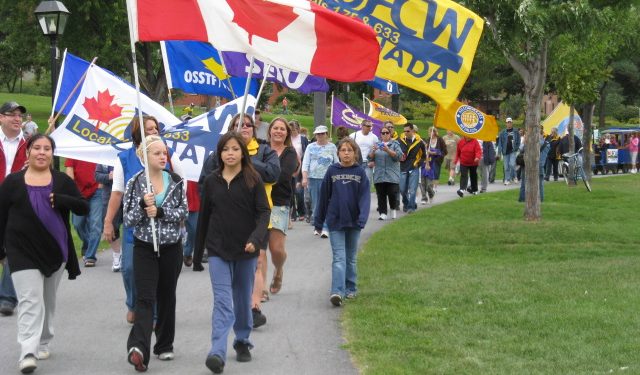 Cornwall Ontario — Labour Day 2013, September 2, brings people together in Lamoureux Park, where the Cornwall and District Labour Council invites working people and their families to a bbq, a stage show featuring Little John, fun for the kids and plenty of interactive challenges for adults, like the crowd favorite Twist contest, a walk for leukemia and music by Trevor Walsh to tie it all together. The public is welcome.

Across the country, labour day celebrates the workplace gains that raised the standard of living and heightened the quality of life for Canadians since the labour movement began in the late nineteenth century: a five-day week, an eight-hour day, the weekend, sick leave, maternity leave, pensions, compensation for workplace injuries and so much more. But the day isn’t only about the past. The labour movement is a contemporary force that is responding to new challenges confronting workers, especially a living wage. The minimum wage in Ontario has been frozen at $10.25 for three years. Labour Council president Elaine MacDonald invites workers and their families to demand a minimum wage of $14.00 an hour. It’s only just.

The festivities in the park get underway at 10 a.m. and wrap up at 3:00 p.m. The event is free, put on by the labour council and participating unions, especially united Food and Commercial Workers, Local 175, and the United Association or Plumbers and Steamfitters Local 71 and many others. Community organizations and individuals have contributed generously too, by donating prizes for the ongoing fundraiser of choice for UFCW, Leukemia and Lymphoma research and treatment. Since adopting the charity as its own in 1985, the union has raised over $28 million nationwide. On labour Day,  celebrants in the Park will have the chance to add to that total.

What: labour Day celebration of workplace gains of the past