Elly May Release Debut Album “A Better Place Than Here”

by SeekersAdmin
in News and Announcements
Reading Time: 3 mins read
12 0 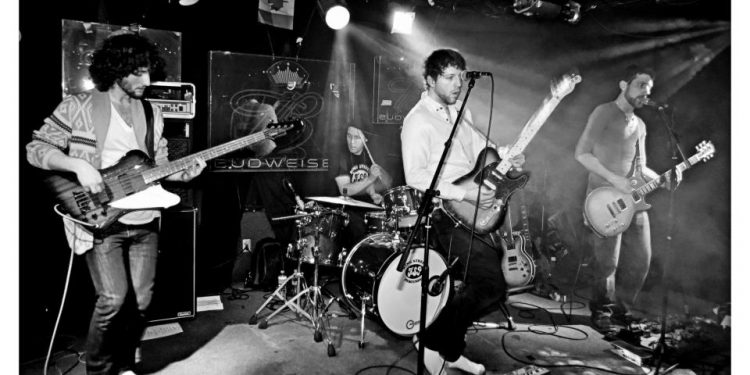 Elly May has come a long way in a short time.

It was just two years ago that the Cornwall band started their music journey, and following multiple shows and a well received EP, the band is ready to release its first full-length album.

“Our biggest evolution has been finding the groove and learning how to play as a band as opposed to four separate musicians,” says lead guitarist Braunson Lalonde. “With the new album, we feel we really grew as songwriters and were really able to write some songs that weren’t so much about several parts mashed together but more about the song as a whole.”

The new album is titled “A Better Place Than Here” and features 11 well-crafted rock songs, with all band members sharing song-writing credits.

“We’re definitely more of a rock band than anything, given our taste for dirtier guitars, however a lot of the songs feature groovy rhythms,” says Mr. Lalonde.

The band slowly began working on new songs about a year ago. At the time, lead vocalist Matt Levesque and Braunson Lalonde were in Ottawa and the bassist Tevin Callan and drummer Kevin Therrien were in Cornwall. Commuting for every practice was slowing things down, so the group decided that Matt and Braunson should head back home to Cornwall in order to speed things along.

Each member brought individual ideas to band practice and the group would then work on those ideas until a song began to take shape.

“Normally one of us will come up with the basis of the song and then we slowly build and shape the song from there, adding and removing parts until we feel it’s as good as it can be,” says Mr. Lalonde.  “Any drumbeat, lyric, guitar lick or bass note had to have a purpose, regardless of how cool it was. If a part wasn’t adding to the song it simply didn’t make the cut.”

Once the band had their songs in place they headed to Studio Reference in St-Calixte, Quebec for two weeks of intensive recording under the watchful eyes of producers Eric Tessier and Hugo Trepanier.

People will have soon have a chance to hear the new songs for themselves at a release party planned for Saturday September 21st at La Maison in Cornwall. Tickets are only $5 and good friends Winston Marley will open for them.

The album will also soon be available on iTunes, Amazon and CD Baby. Folks looking to grab an actually CD can contact the band directly is through the band’s Facebook page.

Elly May will be touring to support the new album and is currently lining up gigs in Ottawa, Kingston, Montreal and Brockville.