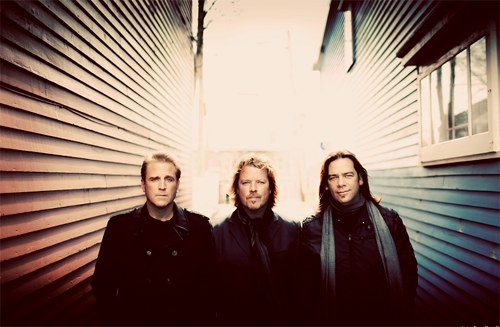 The highly-anticipated show is part of a cross-Canada tour in support of the band’s greatest hits and box set, XX, and in celebration of their 20th anniversary.

“Great Big Sea is one of Canada’s best-known musical acts, and we’re thrilled to have them perform at the Civic Complex,” said Janice Robinson, Facilities Rental Coordinator. “There will be a high demand for this show, so fans should get their tickets early.”

About Great Big Sea
Few bands last more than an album or two — a few tours, a song played on the radio, and then they are quickly forgotten. Alan Doyle, Sean McCann and Bob Hallett have somehow managed to keep the dysfunctional-family-bar-room-brawl-student-art-project-musical-pirate-crew known as Great Big Sea going for two decades. And more often than not, they have done it with more than a bit of flair.

For the hundreds of thousands of fans who sang, danced and celebrated with the band, Great Big Sea has been a constant factor in their own lives. While musical fashions have come and gone, Great Big Sea has maintained an unswerving commitment to their original ideals — a belief that a marriage of their own creativity and the joyous folk music of their home in Newfoundland would be an unbeatable combination.

Compiled by the band members themselves, XX is a special two-disc set which captures the many highs in a recording career that has produced ten full-length CDs and two DVDs. In order to express the band’s two sides, one disc covers the biggest hits from their more pop-oriented repertoire, while the other contains some of their most loved traditional and folk songs. To balance out the discs, the band recorded six new songs — almost a new album in itself — which run the gamut of their varied stylistic approach.

Beyond the two-disc greatest hits collection, XX includes another disc that contains some of the band’s lesser known excursions and experiments.

The Civic Complex has hosted a number of special events in recent years such as the RBC Cup National Junior A Hockey Championship and concerts by Hedley, Nickelback, Alice Cooper and Blue Rodeo.

For more information on the Civic Complex, please visit www.Cornwall.ca.