Fundraiser raises over $2500 for abused, abandoned and neglected animals

by SeekersAdmin
in News and Announcements
Reading Time: 4 mins read
27 0 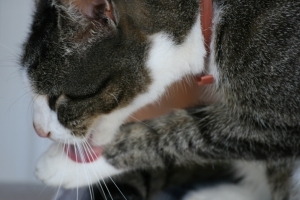 CORNWALL – Roy and Cher’s Rescue Farm, a new not-for-profit organization in South Glengarry, held its first annual fundraiser “A Night of Live Music for the Animals” held at the Legion in Cornwall on Saturday, October 19, 2013. The event, hosted by The Beat’s 92.5’s Kim Sullivan, had over 100 people showing their support. Cornwall’s Heatley opened the evening playing rock hits that had the early crowd singing along. Glengarry’s popular Celtic rock band, Bang on the Ear, had the attendees on their feet dancing to traditional Irish songs. The evening closed off with Ottawa’s original The Goodluck Assembly, who performed at Bluesfest this past summer. Jukebox Pete provided music and karaoke, which ran until midnight with singers performing everything from rock n roll to 90s pop.

There was more than just musical entertainment. The silent auction had over 50 donated items, including a one year Physical Limits VIP full membership, an electric chain saw from JT Sport, and eco-friendly face and body products from Green Beaver. There were hundreds of books at the used book sale table. The Tupperware table had an array of delightful items. Every ticket for the event was entered to win the grand prize draw of two tickets to Aultsville Theatre’s Winter Film Festival in January. Donna McMillan of Fassifern, ON was the winner. Four other door prizes included a meal at Dairy Queen, a bracelet from Pommier Jewellers, a three month membership to Physical Limits and two Cornwall Colts tickets.

Angie Parker, Founder and Director of Roy and Cher’s Rescue Farm, was impressed with the turnout. “I started this organization only five months ago. Word has spread quickly. I am very grateful for such amazing support.” The former television producer and magazine editor attended FARM’s Animal Rights Conference in Washington, DC in July to learn more about animal rescue. “I met so many remarkable people who have animal rescues in the States, including Jenny Brown of Woodstock Farm Sanctuary and Scotlund Haisley of Animal Rescue Corps. I learned so much about animal care, as well as charity and grant applications, and business organization.”

Even though Roy and Cher’s Rescue Farm is only five months old, the organization has been receiving tremendous support. “The Farm has six board members and twenty volunteers. These volunteers help with everything from animal fostering, specialty animal advising, maintenance, promotion, social media and fundraising.” The new notfor- profit organization currently only has a few animals since most of their rescues have been adopted or are in foster homes. However the Farm also provides behaviour advice, as well as helps other rescue organizations find homes for abused, abandoned and neglected animals.

Angie has big plans. “I am ready for this. The Farm’s board of directors is ready for this. Our volunteers are ready. I am very excited for the Farm to grow. We want to take in all animals. The Farm will also be a retirement home for animals who are unable to or cannot be adopted out. We also want to assist with the feral cat populations in Glengarry and Cornwall by catching, spay and neutering and releasing.”

A Night of Live Music for the Animals also provided an opportunity to showcase Roy and Cher’s Rescue Farm and present deserving awards. Genevieve Poirier of Cornwall was awarded the 2013 Volunteer of the Year award for her efforts. “Genevieve has supported the Farm and its mission since the beginning. She helped at our Book and Bake Sale in July; she has adopted and is currently fostering animals; she has helped cut down trees and transport fence posts. The list goes on.” Genevieve received a day pass for two adults to the Ecomuseum Zoo in Ste-Anne-de-Bellevue.

There were two recipients for the 2013 Sponsor of the Year: Nelly Guettinger of Jezybel Animal Care and Vacation Centre in Bainsville and Stacy’s Pet Depot in Cornwall. “Both Nelly and Stacy have been fantastic supporters, supplying us with hay and food and foster care.”

The Farm’s animal rescue team will be spending the next few weeks fixing the fence at their current temporary location to be able to accommodate horses and other livestock over the winter. Volunteers are needed. Roy and Cher’s Rescue Farm is also seeking a volunteer to manage its Twitter and Instagram account. High school students are welcome to apply. This opportunity can be applied to the educational curriculum’s mandatory volunteer hours. If you would like to help out, please email [email protected] or call 613-662-7162.

What’s next? Zengarry Vegetarian Cuisine and Organics by Julia are hosting a fun-filled holiday open house at 53 Dominion St. North in Alexandria, ON. This is a great opportunity to try some fabulous food (including gourmet nut cheeses) and wine. A portion of each and every sale from the evening will be donated to Roy and Cher’s Rescue Farm.

About Roy and Cher’s Rescue Farm

Roy and Cher’s Rescue Farm is a not-for-profit organization that provides comfort to animals who have been rescued from abuse, neglect and abandonment. The Farm’s animal rescue team believes that their lives do not matter any less than ours. Companion animals live in non-violent and spacious environments. No one is ever euthanized to make space for other animals. The team believes in patience and compassion.