by SeekersAdmin
in News and Announcements
Reading Time: 4 mins read
8 0 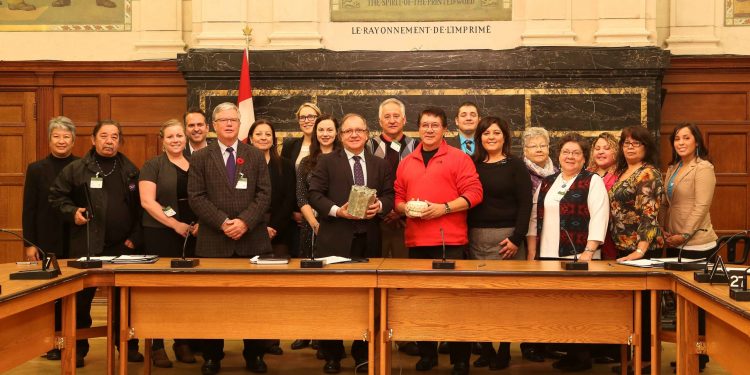 TERRITORY OF AKWESASNE – On Monday, November 4, 2013, Minister of Aboriginal Affairs and Northern Development Bernard Valcourt and Mohawk Council of Akwesasne Grand Chief Mike Kanentakeron Mitchell announced the signing of Agreements-in-Principle on governance and the management of lands. The signings represent significant steps for the Entewatathawi (“We Will Govern”) process that is working to give Akwesasne greater control over the decisions that affect the community in a number of key areas.

In signing the AIPS, Grand Chief Mitchell noted “After years of deliberations with the Department of Indian Affairs, the MCA has come to the conclusion that there are many key elements of the Indian Act that are outdated and no longer useful for our community.” He added, “A 15-year community process has also identified that there are only a few elements of the Indian Act that protect our Aboriginal Rights and should be retained.”

There were two Agreements-in-Principle signed on November 4th: one is concerning governance, the other concerning management of lands. The goal on governance is to update the relationship between Canada and the MCA and ensure accountability to the community. The focus is also to provide the Mohawks of Akwesasne with greater control and authority in other key areas of the community, such as lands.

One area that previously hasn’t worked for the community of Akwesasne is the election of Chiefs and Council, which was previously conducted by Indian Affairs under the Indian Act and experienced legal challenges at nearly every election. As a result, a community referendum was held in 1986 that has since allowed all decisions regarding elections to be dealt with exclusively in the Akwesasne community.

The following year, in 1987, the MCA continued to exercise Akwesasne jurisdiction by taking over membership, with the end result giving the community the authority to decide who shall be a member of Akwesasne. In the same year, the community took over education and set up the Ahkwesahsne Mohawk Board of Education to establish local education criteria for the hiring of teachers and incorporating culture and language into our school’s curriculum. Since that time, we have had a graduation rate of 75 to 80 percent, which has placed Akwesasne amongst those communities having the highest graduation rates across the country. With that success behind us, we found that taking over authority and jurisdiction from Indian Affairs works better for the Mohawks of Akwesasne.

Through consultation with the membership, the MCA has been identifying other areas of governance that are deemed important enough for Akwesasne to take over authority and responsibility from the Indian Act. One such area is Land and Estates, which has caused great heartache and frustration for community members over the years due to government officials, who know nothing about our customs and traditions, using the Indian Act to make decisions involving the settlement of estates in Akwesasne in the absence of wills.

Following the November 4th signing of the Agreements-in-Principle, the MCA noted that it will continue to identify more key areas of the Indian Act that may be brought before the membership, in accordance with our community referendum process, to decide if Akwesasne should continue to exercise more control and take over more authority from Aboriginal Affairs and Northern Development Canada.

The most significant accomplishment from the November 4th AIP signing took place during a pre-meeting with Minister Valcourt that was attended by the Grand Chief Mitchell, along with MCA District Chiefs Steve Thomas, Brian David and Louise Thompson. It was assurances from Minister Valcourt that Akwesasne will be exempted from unfavorable federal legislation that has been introduced by the Harper Government: including Bill S-8 (Safe Drinking Water for First Nations Act), Bill S-2 (Family Homes on Reserves and Matrimonial Interests or Rights Act), and the proposed First Nations Education Act. The exemption also applies to legislation that has already been passed, such as Bill C-27 (First Nations Financial Transparency Act), Bill S-6 (First Nations Election Act) and other acts that are not in the Akwesasne’s best interests.

It was also shared that Akwesasne has put a lot of time into establishing a law-enactment process that includes a community vote for the development of laws and regulations. These efforts are assisted by the Political Protocol that was renewed in 2012 with the Canadian Government that calls for the development of “new and innovative approaches to address Akwesasne’s unique circumstances.”

As a result of this discussion, the Minister was advised that he could exercise his discretionary powers to exempt Akwesasne from federal legislation—something that is not being provided to other First Nations. It is on the condition that a community vote is held at the conclusion of Akwesasne’s law-enactment process.

There are some elements of the Indian Act however, that help protect our Aboriginal Rights and will be kept, as they continue to serve the best interests of the community. A few items are the continued recognition of our people’s tax exemption and protection from seizures. Other areas pertain to future governance and will be decided upon by community members in a referendum that will be held within the next three years.

It is important that the community understands the process and that no change in the present legal arrangement be made without the clear approval of Akwesasne Members.