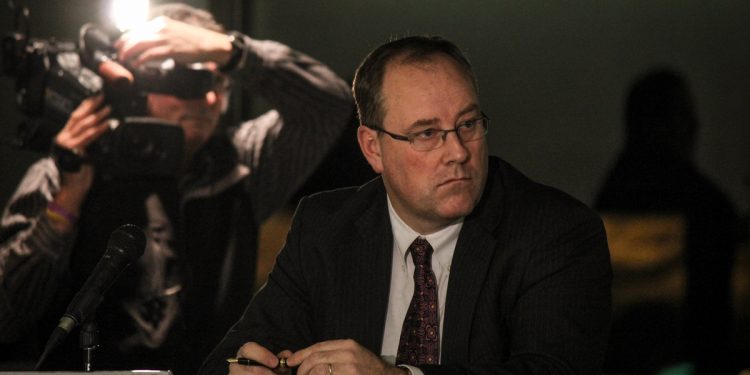 Cornwall, Ontario – A sizable crowd of concerned citizens showed up at the Civic Complex on Wednesday night to attend a public forum about the installation of storage tanks on Cornwall’s waterfront.

The event was put in place as a combined effort by the Chamber of Commerce, City Council, Groupe Renaissance amongst others, to take the pulse of the population on the topic.

Moderator Nicole Mills introduced the panel of officials, which was comprised of  Chuck Charlebois from Groupe Renaissance,  MP Guy Lauzon, Doug Smith from the Transport Ministry and David Murphy representing the Mayor and City Council.

After a brief welcome and thank you from Chuck Charlebois, Guy Lauzon took the floor, first stating that he knew nothing about the situation when it first was brought up to his attention on Friday.  Monday Morning, he placed a call to Transport Minister Lisa Raitt to express his concerns.  Mrs Raitt allegedly told him that she was very concerned about the circumstances as well.

Doug Smith, Chief of Staff for the Minister, followed. “I don’t have answers”, he said, “but I’m here to listen”, setting the tone  for the entire evening.

A question period where residents were encouraged to speak up followed.  Unfortunately, the answer to most questions was a resounding “WE DON’T KNOW” and although everybody seemed to agree that a solution pleasing all parties should be sought after, many felt this to be unrealistic at this point.

Mr. Lauzon suggested that the municipal government should consider buying the land as a potential resolution.  But when asked what the cost of such a purchase would be, citizens were

once again told “WE DON’T KNOW”.   Former City Councillor Leslie O’Shaughnessy raised the very valid point that in order to complete such a purchase, Akwasasne would have to be included in the talks and approve the purchase–which is unlikely to happen.

Mark McDonald, who ran against Bob Kilger in the last municipal elections, alluded that Cornwall, and Mr. Smith, should play hardball and return to Ottawa with only one option on the table:  break the lease.

What do you think?  Is there a potential resolution to this problem?  Should Cornwall have the final say on its waterfront or should the Federal Government have Carte Blanche to develop this land however it sees fit?  Comment below or send in your letters to [email protected]

Media Release from the City of Cornwall : Still Looking for Details of Harbour Development Project