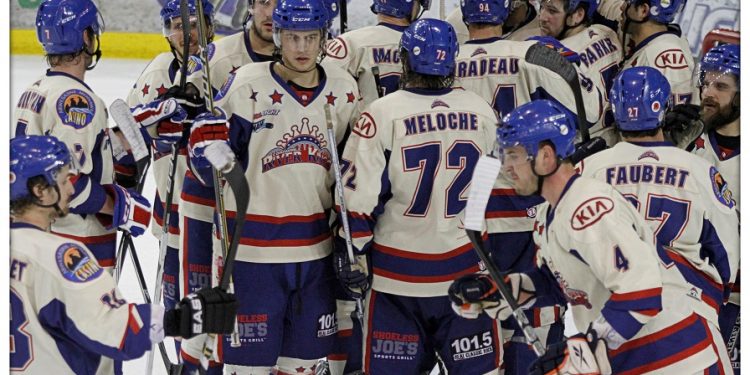 Cornwall Ontario – The Cornwall River Kings starting lineup featured size and grit but it was their speed and skill that came through on Sunday afternoon at the Civic Complex.

Cornwall skated to a 4-2 victory over Saint-Georges in front of 1,355 fans for its second victory of the weekend. With the win, the River Kings improved to 10-12-4.

The speedy Julien Corriveau opened the scoring for Cornwall, moments after the River Kings killed off a lengthy 5-on-3 powerplay to start the game. Corriveau’s wrist shot from the slot at 3:43 squeezed through the legs of Cool FM goaltender Jeremy Duchene.

Then, Dominic Chiasson showed great patience, giving the Kings a 2-0 lead with 2:19 remaining in the first. With Duchene falling to the ice, Chiasson outwaited the goaltender and lifted the puck over his glove.

Just 12 seconds into the second, Francis Lessard took a feed from Nick Pitsikoulis and backhanded a shot past Duchene.

Fabien Laniel beat Kings goaltender Loic Lacasse up high at 11:07 of the second, converting on a nice cross-ice pass by David Starenky. Then with Lacasse down and out, Cool FM captain Jean-Philippe Paré slid the puck into an open net at 17:31 of the second.

Moments later, Sasha Pokulok regained the momentum for Cornwall with a beautiful goal. The smooth-skating defenceman circled the net then banked a wrist shot off the post and in with 1:12 to go in the second.