The Answer is still ‘No Tanks’

by Don Smith
in News and Announcements
2 min read
0 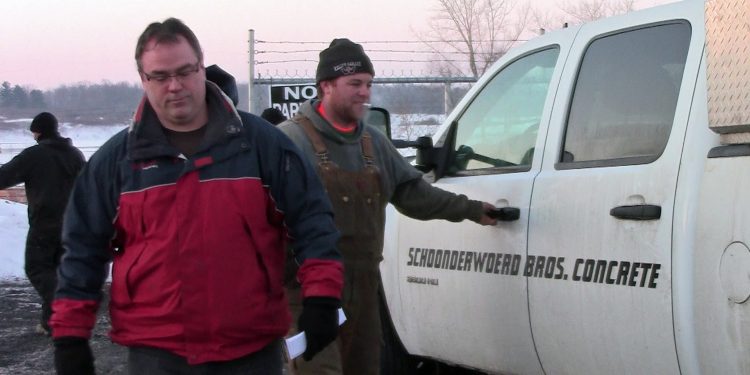 In response to the unannounced work resumption at the calcium chloride storage tanks on the City’s waterfront, City Council candidate Todd Bennett organized a spur-of-the-moment protest at the Trillium Distribution site on Harbour Road.

Contrary to reports circulated, access to the site was not interrupted, but the protestors’ presence from 7 until 8 this morning was made known. Many contractors entered through the main gate while others chose the south gate.

Among those in attendance were three residents of the nearby 710 Cotton Mill Lofts development. Clearly they were not impressed by this turn of events which is quite contrary to the concept of the waterfront recreational neighbourhood they thought they were investing in.

Muriel Cryderman shared with The Seeker that: “this affects me by destroying my waterfront, my recreational opportunities with [my neighbours].” She also complained that this development takes Cornwall backwards towards an industrialized waterfront.

Local businessman, Council Candidate and Cotton Mill Loft resident Guy St-Jean told us: “Years ago we saw the vision of this waterfront [as conveyed by Renaisance’s Chuck Charlebois] – it is a dream and a vision that we must make a reality. We bought into the big picture. This is a slap in the face.”

Their neighbour, Leanne Gadbois, agrees with Cryderman and St-Jean: “the vision was of recreation, a nice place to live and green space. This (tank farm) is not part of our vision of what we want Cornwall to be.”

Councillor Syd Gardiner was out of town on City business, but gave The Seeker the following statement: “Trillium and the federal government have absolutely no respect for the City of Cornwall. As Council we have followed the steps we received from our legal team which the feds and Trillium have completely ignored. Our next step is an injunction then court.”

In response to the tank project, Bennett shared: “really the only answer is ‘No Thanks’.”

Don is a hometown photojournalist and videographer who creates content pertaining to a number of topics, notably good news, local history and social justice. Professionally he is the Manager & Associate Curator of the Cornwall Community Museum in Cornwall's waterfront park.

Jamie Gilcig to run for Mayor of Cornwall Ontario