by SeekersAdmin
in News and Announcements
Reading Time: 2 mins read
23 1 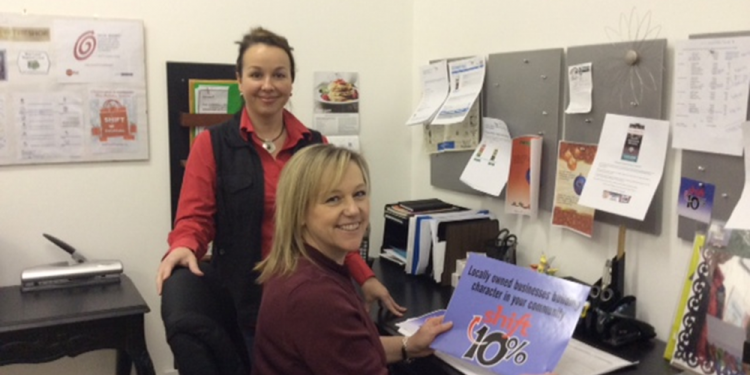 The Counties, Ontario – The first meeting of the Economic Development Officers Working Group for 2014 was held this past week at the North Stormont Municipal Office in Berwick. Part of this meeting included a passionate introduction to the Shift 10% campaign, lead by champions Kim Stewart, Shift 10% Coordinator, and owner of Stokefire; and Donna Primeau, South Stormont, Chamber of Commerce President and owner of Showcase in the Long Sault Plaza.

Shift 10% Back to Local is a campaign designed to remind the public about the benefits of supporting their locally owned businesses. Campaign advocate Kim Stewart believes that by actively shifting 10 per cent of shopping to local businesses, the whole community will benefit. “The advantage is that we are their neighbours, we are the ones who support their son’s and daughter’s minor sports, donate to community fundraisers, and hire youth from the neighbourhood” said Stewart.

“The South Stormont Chamber of Commerce (SSCC) has started to develop a 36 month campaign with a primary goal of increasing the profiles of local businesses,” stated Donna Primeau. There is no charge to participate in the program, only the commitment to be an ambassador of the Shift 10% campaign. SSCC has been presenting across Stormont, Dundas and Glengarry with the hopes that local business owners will support the Shift 10% campaign. “You do not have to be a Chamber of Commerce member to participate in the program – we want Shift 10% to become region wide – and in the future be recognizable throughout eastern Ontario,” added Stewart.

For more information on the Shift 10% Back to Local campaign, please email [email protected]

Stephane Lafrance Eager to Get 2014 Underway