by SeekersAdmin
in News and Announcements
Reading Time: 1 min read
32 3 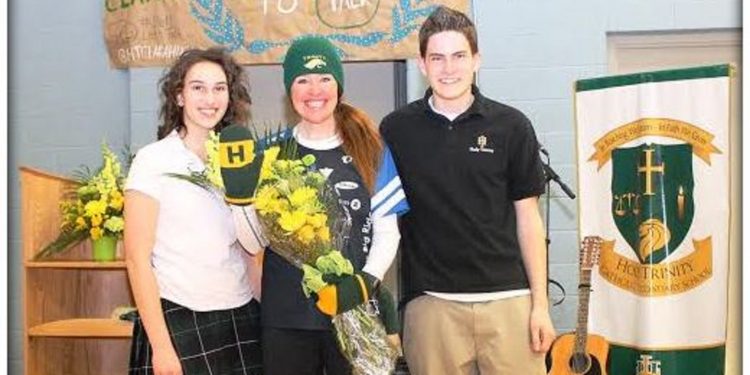 Cornwall Ontario — The Catholic District School Board of Eastern Ontario was pleased to host Clara Hughes at Holy Trinity Catholic Secondary School, on Tuesday, March 25. The six-time Canadian Olympic speed-skating and cycling medalist, who is also the national spokesperson for Bell Let’s Talk, chose Holy Trinity as one of the stops on her 110-day national bicycle tour across Canada. Clara’s Big Ride aims to grow awareness, acceptance, and action around mental health issues, and to encourage all Canadians to end the stigma around mental illness.

Students from the school lined the driveway to welcome Hughes upon arrival. Hughes, who has battled depression, spoke to students about her experiences with mental health problems. She discussed her own battle, and how she has also felt compelled to help those close to her, who have struggled with depression. The inspirational presentation was well received by the large crowd.

Hughes’ message supports the CDSBEO’s larger, ongoing Board-wide mental health initiatives, which have fulfilled various stages of implementation since 2011. The CDSBEO continues to be a leader around mental health awareness through the Empower (Bully Reporting) App, and through a partnership with the Mood Disorders Society of Canada. Most recently, the CDSBEO has also joined the Defeat Depression Campaign, an annual, national fundraising and awareness movement held in communities across Canada during the month of May. CDSBEO schools will be hosting events and fundraisers to support this cause.

Are we taking things too far? A what in a what?