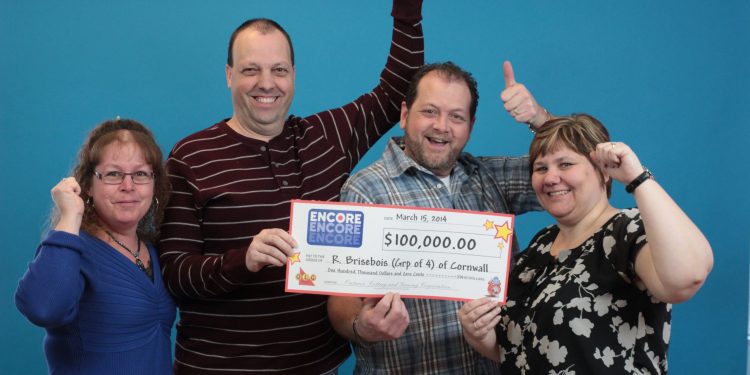 “Marc and Lisa bought the ticket for us as a gift,” said Richard, while at the OLG Prize Centre in Toronto to claim their prize. “When we realized it was a winner, we decided to share it with them.”

“This win is so unreal! We’re still in shock,” shared Julie.

“It’s the best dollar we ever spent!” added Marc.

The group plans pay off some bills and take a trip to celebrate their win.

ENCORE can be played in conjunction with most online lottery games for an extra $1. There is an ENCORE draw every day.

The winning ticket was purchased at Esso on County Road 2 in South Lancaster.

OLG is a provincial agency responsible for province-wide lottery games and gaming facilities. Since 1975, OLG has provided nearly $38 billion to the Province and the people of Ontario. OLG’s annual payments to the Province have helped support health care; education, research, prevention and treatment of problem gambling; amateur sport through the Quest for Gold program; and local and provincial charities.