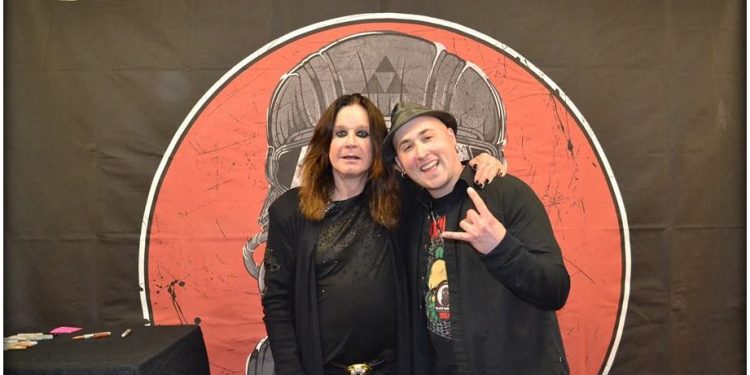 On Sunday, April 13th, fans gathered in their masses to witness the reunited heavy metal pioneers Black Sabbath rock the nation’s capital. Of the 13,000 tickets sold, some fans, including myself, were fortunate enough to purchase a VIP package full of perks.

While early entry into the Canadian Tire Centre was nice, it was finally meeting Ozzy Osbourne for an autograph and private photo that made my day. I’ve been a fan since I was 15. Osbourne, while a little shaky, was full of smiles hugging and kissing the ladies and putting his arm around his many fans.

What followed next was a pre-show party complete with food and open bar. While enjoying some brews and veggie rolls, it was great to socialize with such fans like Margaret, 86, who came from upstate New York with her daughter. Just as amazing was the southern couple Hollie and Ron who drove 22 hours all the way from Alabama!

At last, it was show time. While Canadian rockers Reingwolf received a warm welcome, it was clear that the fans had waited to once again see Osbourne perform with his original band mates. From my front row center seat, anticipation grew as the banner dropped and I heard the sirens roar. Black Sabbath opens with their classic tune War Pigs.

Osbourne, 65, was full of energy as he jumped up and down between verses. The band played classics like Snowblind, N.I.B. and wasn’t afraid to touch new material from their latest record titled 13, playing three songs from their first full length album with Osbourne since 1978’s Never Say Die.

“Show me your cell phone lights” Osbourne yelled as the band played their classic title song. Midway through the set, Osbourne took a break which left guitarist Tony Iommi and bassist Geezer Butler to set up for Tommy Clufetos’s drum solo, filling in for the only original member not present. Bill Ward opted out due to contract issues.

With the band returning, Black Sabbath brought out the big guns. “I am Iron Man” sang Osbourne. “Clap those hands!” urging the crowd to go crazy if we wanted one more song. Did newcomers really think they wouldn’t close the 16 song set without playing the classic rock staple Paranoid?

It was a rainy night in Ottawa. It was Black Sabbath on the Sabbath. How fitting.