Over 30 tonnes of litter collected during Spring Clean-Up Week 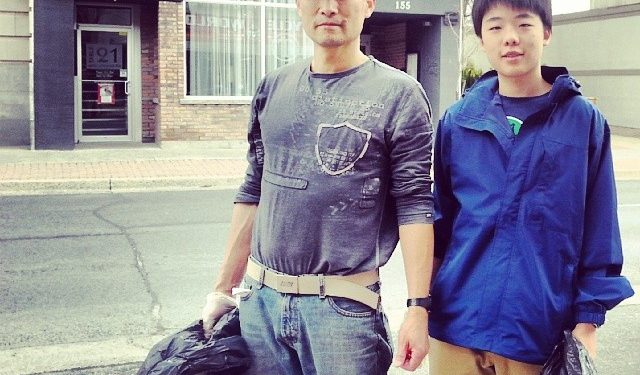 Cornwall Ontario — Tammy Marion was looking for a way to get involved in her community when she heard about Spring Clean-Up Week. She contributed in a big way by helping to clean up five different locations during the week-long event. “My heart grew two sizes with every garbage bag I closed,” she said. Dominic Marceau shares Marion’s enthusiasm for community involvement. The 20-year-old university student organized a group of 20 people – most of them students – to clean up along the waterfront near the Kinsmen soccer fields. “Garbage and pollutants are drastically filling the planet. At some point we need to make a change, and I think it’s up to my generation to take initiative,” said Marceau. “We live in such a clean community in comparison to other cities around the world, and I would like to keep it that way.” Those are just two of the many stories behind this year’s Spring Clean-Up Week, a community-wide initiative organized by the City of Cornwall in partnership with the Downtown and Le Village Business Improvement Areas. A total of 53 individuals and groups – numbering an estimated 700-plus combined – registered and volunteered to clean up a park, street or other public space before or during the week of May 3rd to May 10th. Participating teams came from schools, businesses, churches, sports organizations, service clubs and collections of families and friends, among others. “We are thrilled with the turnout for this event,” said Mayor Bob Kilger. “We asked people to help make our city look even better and the community responded in a big way. We had groups volunteering in virtually every corner of our city.” For the duration of the week, six garbage bins were placed in the Downtown and Le Village areas as drop-off points. Many people took advantage of the bins to do some spring cleaning around their homes or businesses. All told, 26.85 tonnes of litter was collected from the bins over the course of the week. An additional 3.9 tonnes of litter was collected during the week by Parks and Recreation staff, with some of that coming from participating teams requiring special pick-ups. “The bins had to be emptied 11 times during the week,” said Nicole Robertson, Solid Waste Supervisor. “We received a lot of positive comments about having numerous bins in the community. It made it easier for people to participate.” Neighbourhood parks received a lot of attention during the week along with the Downtown and Le Village areas, where a number of groups focused their efforts. A kick-off event was held on May 3rd in Le Village and staff from Big Brothers Big Sisters was on hand to collect e-waste free of charge. “We were pleased to partner with the City on this initiative,” said Dr. Michel Dubuc, Chair of Le Village BIA. “It was an easy way to give back to the community and make a difference.” “It was a great display of community pride and the end result is a cleaner, greener community for both residents and visitors to enjoy,” added Allison St. Louis, Chair of the Downtown BIA.