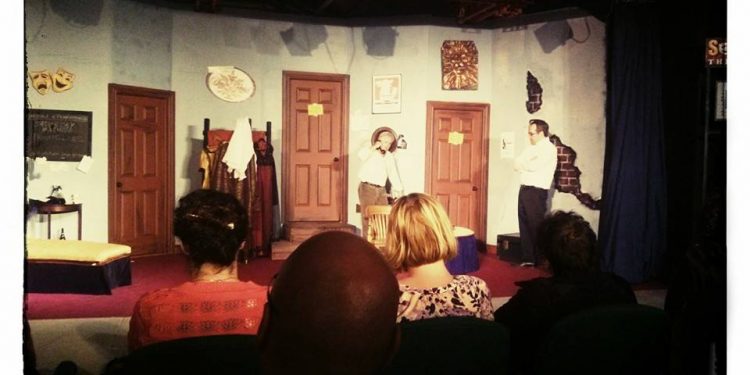 When Ken Ludwig wrote “Moon over Buffalo”, I doubt he foresaw that it would one day be produced in a quaint, intimate studio, on a far away road, in Cornwall, Ontario.  It is, afterall, the play Carol Burnett chose to stage her return to the Broadway scene after 30 years of absence.   But The Seaway Valley Theater Company’s rendition of the play is opening Friday and quite frankly, It couldn’t be better.

I almost feel like a broken record when I write a review of one of SVTC’s productions.  I only rave.   I never have anything bad to say!  From producers, to actors, to set and costume designers, this team of volunteers always  amazes me and exceeds my expectations.

This time is no exception.  Producer Allison Main, director Cathy Durham and stage manager Mike Petrynka deliver an hilarious end result with a cast of impressive talent.  Actor Andy Davidson, in his first lead role as George Hay, sets the tone of this fast paced comedy where sexual innuendo and classic comedy collide.  The role is physically demanding and Davidson makes it seem effortless.  Particularly funny are the scenes where he plays a drunken George, tripping, falling and slurring words.  Christa Pare, in the role of Charlotte Hay, George’s Wife, is equally delightful.

At the door:
Box office opens one hour before show time. Cash only.

Synopsis: George and Charlotte Hay, a husband and wife team of actors, struggle to perform Cyrano de Bergerac and Private Livesin repertory while dealing with family crises and possibility of a Hollywood director’s visit. Hilarious misunderstandings pile on madcap misadventures, in this valentine to Theatre Hams everywhere.

Ontario heads to the polls June 12th for a Provincial Election