by SeekersAdmin
in News and Announcements
Reading Time: 2 mins read
39 3 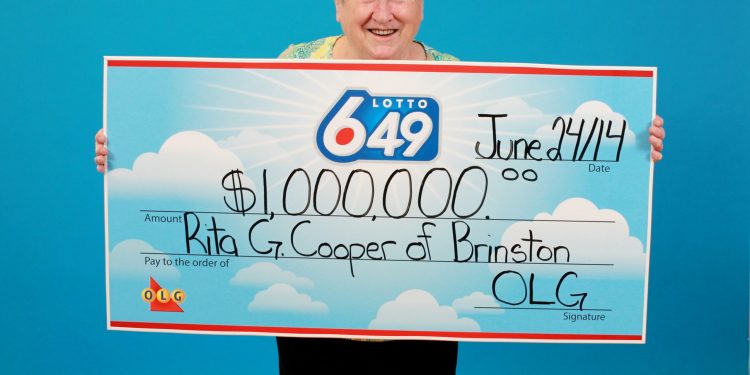 Toronto, ON – Brinston resident Rita G. Cooper is living her lottery dream after winning a Guaranteed $1 Million Prize from the June 18, 2014 LOTTO 6/49 draw.

“It was my 48 year marriage anniversary so I bought an extra ticket. I checked the ticket at the truck stop and the clerk told me I won $1 million!” shared Rita, while at the OLG Prize Centre in Toronto to claim her prize. “I was so shocked I had to hang on to the counter for dear life!”

Rita immediately went to share the news with her husband who was having a bite to eat in the restaurant. “I gave him a kiss and told him ‘that’s the first time you’ve been kissed by a millionaire!’”

The 78 year old retiree plans to contribute to her grandchildren’s education, bank some of her winnings and treat her husband to a nice dinner out.

This winning ticket was purchased at the CNIB Lottery Booth in Walmart on Brookdale Avenue in Cornwall.

OLG is a provincial agency responsible for province-wide lottery games and gaming facilities. Since 1975, OLG has provided nearly $38 billion to the Province and the people of Ontario. OLG’s annual payments to the Province have helped support health care; education, research, prevention and treatment of problem gambling; amateur sport through the Quest for Gold program; and local and provincial charities.