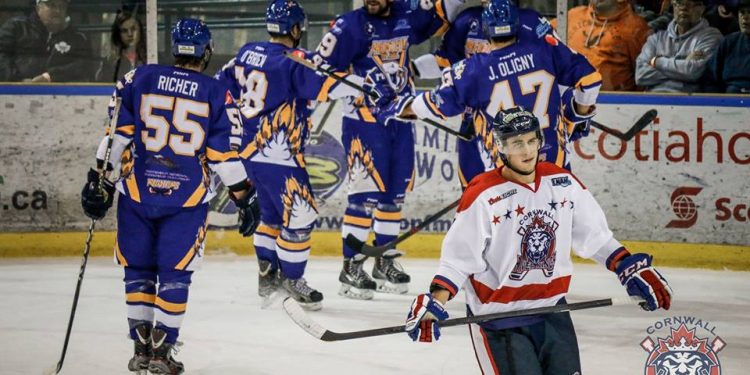 CORNWALL – Alexandre Imbeault and the Laval Predateurs spoiled the River Kings party on Friday night, skating to a 10-4 victory at the Civic Complex. Imbeault scored four times as Cornwall was badly outplayed in its home opener.

River Kings rookie forward Antony Courcelles, who recorded a hat trick, opened the scoring 1:11 into the contest, but it was all Laval the rest of the way.

David Masse beat Loic Lacasse top corner at 11:06 of the first before Alexandre Imbeault added two powerplay goals. Chris Doyle then scored from the hashmarks with 1:13 to play in the first to give the Predateurs a three-goal lead. Laval outshot Cornwall 18-6 in the opening frame.

Imbeault’s tap-in goal at 11:29 of the second completed the hat trick. With the River Kings trailing 5-1, Dylan Garrioch, Francis Lessard and Chris Cloutier tried to spark the Kings.

But Laval ended up on a lengthy powerplay and Juraj Kolnik chased Lacasse with a blast from the point at 14:13 of the second. Pete Karvouniaris took over in goal for the River Kings.

Imbeault added his fourth of the contest, on another powerplay, with 3:46 to play in the second. With 63 seconds left in the middle frame, Vincent Richer made it 8-1.

Courcelles scored his second of the night 1:58 into the third, perfectly placing a wrist shot past Lacerte. Then at 3:20, Nicolas Corbeil tipped home a Doug Andress shot from the point.

Courcelles scored his third of the game with 4:36 to play, once again beating Lacerte with a clean wrist shot.

Laval outshot Cornwall 41-31. Imbeault (first), Pierre-Luc O’Brien (second) and Courcelles were the announced three stars, as chosen by the fans.

The River Kings are back in action on Sunday, when they visit Trois-Rivieres. Game time is 4 p.m. Cornwall’s next home contest is Saturday, Oct. 25 vs. Jonquiere.