Mick Foley is the King of the Comedy Ring

by SeekersAdmin
in News and Announcements
Reading Time: 2 mins read
14 1 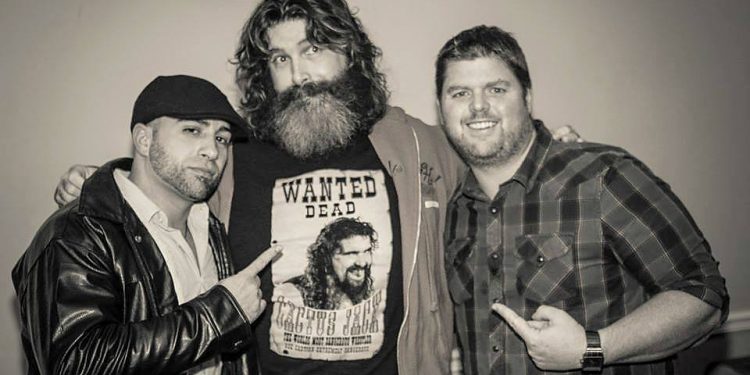 Cornwall Ontario — It was a night of nostalgia and laughs for about 150 wrestling fans who saw a legend on stage Wednesday night at the Ramada Inn in Cornwall. WWE Hall of Famer and New York Times Best Selling Author Mick Foley was in town for some spoken word and comedy as a part of his Hardcore Legend Tour. His “Tales From Wrestling Past” brought fans closer to the wrestling world.

Mick Foley has had many wrestling persona’s over his career including Mankind, Dude Love, and Cactus Jack. Foley brought the persona of Mankind alive when he took out Mr. Socko much to the delight of the audience.

He told many stories last night, including being in a movie with Riley Keough, who is Elvis Presley’s grand daughter, and how she wore the red zip up hoodie he was wearing between scenes of a movie when she got chilly.

Mick Foley reminisced about famous matches, wrestlers, the origins of Mankind, and some very interesting road trips with Al Snow and Jake ‘The Snake’ Roberts. From the Undertaker and Hell in the Cell, to the night Bret ‘the Hitman’ Hart got screwed by Vince McMahon in Montreal, to his appearance in Cornwall Ontario for Monday Night Raw the very next day – each story had the audience roaring with laughter and excitement.

It was an intimate show in Cornwall, a huge contrast to a few nights ago when Mick Foley was on Monday Night RAW, live from Kansas City. But whether he is on national television in a sold out arena, or at a spoken word event in a small town, the Hardcore Legend always brings his ‘A’ game and his best performance. The audience gave Foley a standing ovation at the end of the show.

After the show Mick Foley met with and had his picture taken with wrestling fans.

The MC for the show was local wrestling champion Randy Berry. Comedian Mark Vincent performed as well and got a loud ovation for his comedy routine.

It's a new day for Canada