by SeekersAdmin
in News and Announcements
Reading Time: 2 mins read
19 0 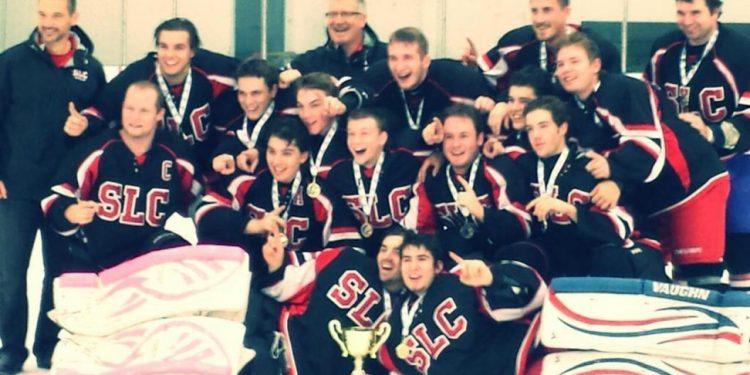 Toronto Ontario — The SLC-Cornwall men’s hockey team began the 2014-15 season at the George Brown College Invitational on Friday October 24th. The one day tournament guaranteed the Sharks a minimum of three games, with the potential of playing five depending on the team’s success during the round robin.

Game One: vs. University of Toronto-Scarborough

The Sharks pulled out a 4-0 victory in their first game of the season against the club team from the University of Toronto-Scarborough. Matt Gregoire and Brian Landry scored two goals each for the Sharks, with Ryan Cooper earning the shutout.

It was a tough first period for the Sharks as they found themselves down 3-0 in the opening frame. The Humber Hawks scored again in the second period, taking a commanding 4-0 lead but quickly after, Eric Evans appeared to have put the Sharks on the scoreboard, but the goal was called back.

In the third period, Mitch Lefebvre scored on a penalty shot to break the Hawks shutout and Gregoire scored his second goal of the tournament to make the score 4-2. The Sharks controlled the play in the third period but were unable to pull off the comeback win, losing 4-2.

The Sharks got back on track with a 5-2 win over the University of Toronto (St. George Campus), and now advance to the semi-finals at 3:45. Their opponent has not yet been decided.

Landry scored his second goal of the tournament for SLC-Cornwall, with Christian Leger (2), Glenn Belmore, and Kevin Veilleux also scoring for SLC.

Facing the host College in the Semi-finals, the Sharks opened the flood gates, outscoring the Huskies 6-1 and now advance to the Finals where they will face the 2013-14 Challenge Cup winners, the Humber College Hawks.

In dramatic fashion, the Sharks knocked off the defending Champions 3-1, winning the first tournament of the year. Matt Gregoire scored all three goals for the Sharks, including an empty net goal with just two seconds remaining.

“This was a great start to the season” said co-head coach Sean Boulerice.

Because the Sharks are hosting this year’s championship, they automatically qualify for the year-end tournament. But the team wants to ensure they earn their spot at the Challenge Cup.

“We told the boys that this should be a special year culminating with hosting the provincial championships. But we don’t want to back into it. We want to put together a solid season and hopefully generate some good points along the way.”

“The fall semester is a short sprint with just two events in 2.5 weeks so it is important to get the basics taken care of, get some good habits established which should pay dividends later on in the new year” said Boulerice.

The next tournament for SLC-Cornwall is the Sheridan College Invitational on November 11th, in Oakville.

Trench Town Oddities to open for Big Wreck on Monday