by SeekersAdmin
in News and Announcements
Reading Time: 2 mins read
35 3 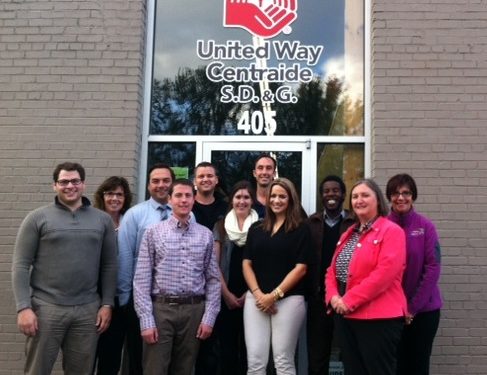 Cornwall Ontario – United Way/Centraide of Stormont, Dundas & Glengarry revels in a dynamic group of committed volunteers for its 2014 Campaign – We Believe in Community.

Since August, a vibrant group of volunteers have been meeting regularly to form the Campaign Team for United Way’s 2014 yearly Campaign. “We have some really dedicated individuals around our campaign team table. Many of our team were born and raised in SDG and plan on raising their families in the area. Our team believes in Community”, said Nolan Quinn, 2014 Campaign Chair. “It is great to see the energy and commitment within our team. We have brought in many new members, and are always open for new volunteers dedicated to their community”.

This is the second year as Campaign Chair for Quinn, owner of the local Dairy Queen, Grill & Chill Cornwall and Co-Chair, Luc Lacelle, Financial Planner with RBC.  The organization is extremely pleased to have both on board again to lead the campaign this year, bringing their enthusiasm and dedication to the Campaign. “I volunteered for the Campaign Chair position as I have seen what this community does for its citizens. We look after each other! I feel the need to give back to community where I can through the gifts of time or money. I encourage others to volunteer where they can; as much as you do it to help others, it is also gratifying to know you are making a difference”.

The United Way Campaign Team is comprised of volunteers who have been involved with the Campaign in the past as well as several new team members. “I see it as an opportunity to give back to our community and to be hands on in the fundraising of important dollars for agencies that rely on the United Way funding”, said Ashley McCool, experienced Campaign Team member. “I’m excited to work with an amazing team who are dedicated to the cause and who bring new and innovative ideas to the team”. The group brings together a successful mix of dedication, enthusiasm and commitment to helping others by reaching the 2014 Campaign target. The organization anticipates a successful result again this year due to the hard work and devotion of its volunteers.

“It’s all about serving the community’s greatest needs. Let’s face it, eventually in life we all need help in one form or another. I know that the United Way is filling much needed voids and champions multiple local services such as Meals on Wheels, Boys & Girls Club and Glengarry Inter Agency Group to name a few”, states Lee Theodore who is new to the Campaign team this year. “It’s just a little time from me, multiplied by numerous volunteers doing the same in hopes that we can make our communities a little bit better – it’s a good thing to be a part of. Not for me, but for the community”.