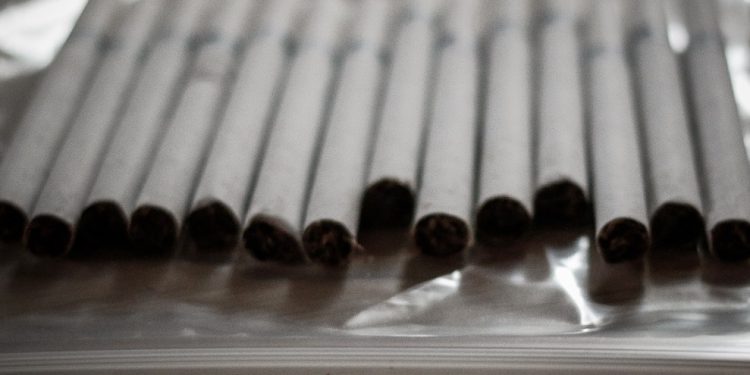 Cornwall Ontario — On November 3, 2014 members of the Cornwall Regional Task Force (CRTF) were conducting surveillance in the Bainsville area of South Glengarry, when they noticed a boat with two occupants travel into the bay without navigation lights on.  Members closed in on the area where the boat was seen and observed a white Ford van backing up towards the shoreline.  Officers approached the van and observed a pile of cardboard boxes, believed to contain contraband tobacco, and one male standing next to them.  A second male was kneeling inside the van and there was more contraband boxes stacked inside.  Gabriel ROY, age 18, of Huntington Quebec and David HINSE-LANIEL, age 20, of Valleyfield Quebec were arrested and charged under the Excise Act, 2001, for Possession of Contraband Tobacco.  Both males were released on a Recognizance. Their next court appearance was set for January 13, 2015.  There were a total of 80 cases of contraband seized.

In the late evening of November 19, 2014, the CRTF members were advised by Valleyfield RCMP that there was a boat moving close to the shore at the Ontario/Quebec border that appeared heavy and was operating without navigation lights.  The CRTF members deployed on foot and observed three individuals moving bags from the shoreline to two parked vans on a property in the Township of South Glengarry.  Police descended on the scene and the three males attempted flight.  All three were apprehended and arrested for possession of unstamped tobacco contrary to Section 32(1) of the Excise Act, 2001.  There were a total of 115 bags of fine cut tobacco with a total weight of 2,130 kilograms that were seized.  Arrested on scene was 36 year old Edin CEKIC of St Catherine,Quebec, 26 year old Gabriel FOURNIER-CLAVEAU of Montreal, Quebec, and 28 year old Abass SOBH also ofMontreal, Quebec.   All three males were released on a Recognizance with a $500 bond and a first appearance date of January 27, 2015 in Cornwall.

Members of the CRTF were patrolling the shoreline of the St Lawrence River on Thursday November 20, 2014, when they received information from the United States Coast Guard (USCG) advising that there was a boat travelling north from the US towards Canada.  With the assistance of the Valleyfield RCMP, the boat was tracked and observed docking at an area near Gardner Avenue in Cornwall.  There were two males seen standing on the dock.  Once the vessel departed, members of the CRTF moved in and the two males ran off trying to evade police.  The police pursued and located of one of the males who had fled the scene.  Lying face down near a fence and wearing a black balaclava, was John PAPINEAU, age 34 of Cornwall.  PAPINEAU was charged under the Excise Act, 2001, for Possession of Unstamped Tobacco after police located 20 cases of contraband tobacco on the dock.  He is still in custody awaiting a bail hearing.

On November 27, 2014 members of the CRTF received a call from the Canada Border Services Agency (CBSA) advising that a Cadillac Escalade travelling through the port of entry had been referred for a secondary inspection.  A backpack with a Ziploc bag inside containing 39 grams of suspected marihuana was located. Members of the CRTF attended the port of entry and arrested Stuart MYIOW, age 52, of Kahnewake, Quebec and he was charged with possession of a substance under the Controlled Drugs and Substances Act.  He was also found to be in breach of his probation was charged accordingly.  MYIOW was released on a Recognizance with a $500 cash deposit.  His first appearance is set for December 16, 2014 in Cornwall.

Shortly after midnight on December 1, 2014 a boat was observed by the CRTF travelling at a high rate of speed eastbound on the St Lawrence.  Members tracked the boat to the Penville Bay area near the Ontario/Quebec border.  Police officers observed two males on shore, two males in a boat and they saw the boat being unloaded.  Members attended the area and upon their arrival all subjects had departed.  Police searched for the individuals with negative results.  CRTF members did locate the bags that were being unloaded from the boat and seized a total of 85 bags of fine cut tobacco with a total weight of 1,210 kilograms.  No charges have been laid and the investigation is still ongoing.

The individuals noted above, who have been charged under the provisions of the Excise Act, 2001, also face charges under the provincial Tobacco Tax Act for possession of unmarked cigarettes.

The RCMP would like to remind everyone that smuggling or being in possession of illegal tobacco is a criminal offence that could lead to serious consequences. Individuals who are found guilty will have a criminal record; will have to pay heavy fines or face imprisonment.

“December is a time to celebrate” said Inspector Kimpan Officer in Charge of the CRTF, “we are proud to provide our services to this community and we will continue doing so throughout the holiday season.  The CRTF would like to wish everyone safe and happy holidays”.