Top Ten Citizens of the Year

by SeekersAdmin
in News and Announcements
Reading Time: 3 mins read
47 3 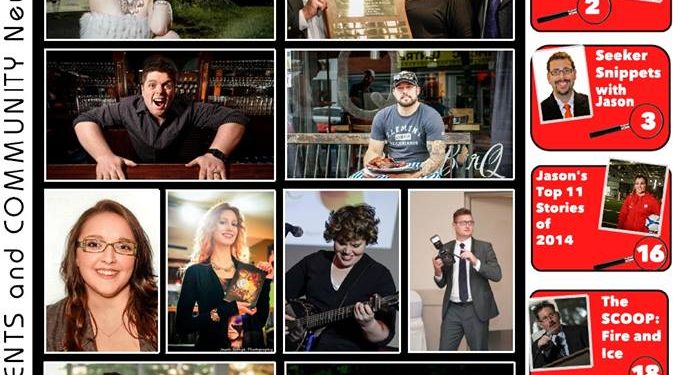 Cornwall Ontario — Here are the Seeker’s Top Ten Citizens of the Year for 2014. We have many outstanding Citizens that deserve acknowledgement, more than a Top 10 list’s worth. We hope this list puts a spot light on at least some of the people who make this community amazing. In no particular order here is our list:

Mark is a promoter and comedian. The last 5 shows he brought to Cornwall, at Bar Q, were all sell-outs. Mark is establishing a full time monthly room. In 2014, he booked WWE wrestler Mick Foley. As a comedy act, he opened for Mike MacDonald, Mick Foley, Daryl Lennox and had his first pro weekend show at a Yuk Yuk’s club. He also performed at Aultsville Theatre.

In 2014, the prestigious Jacques Richard Trophy for Top Sports Personality went to Kelly McGillis. Kelly is a weight lifter (and hockey enthusiast) who earned gold at the Ontario Senior Weightlifting Championship. She has the potential to make the next Olympics.

In 2014, Steff Groulx, who was a contestant on Canada’s Next Top Model back in 2007, returned to the modeling industry and joined Sajency Models & Talent in Ottawa. She did her first commercial work after 5 years of absence. She was also the voice of the “Oh Canada” at the River King Home opener.

2014 has been a break out year for Bar Q restaurant and its owner, Christian Barque. After making the front cover of Cornwall Tribute Magazine and receiving raved reviews from patrons and critics alike, the venue hostsed sold out Yuk Yuk’s Comedy events and live music and participated in the 5th Annual Trunk Sale. During ribfest, Barque even challenged ribbers for best ribs. Now that’s confidence!

This year, Carilyne Hebert sure has made a mark on Cornwall’s history. She is the youngest person to have been elected to Cornwall’s City Council since Cory Kennedy. She also received the title of Big Sister of the Year, she was a Seekers Choice Volunteer Award Nominee, received the 2014 Community Activist Award and was the President of The Art Gallery. Busy Bee!

Jamie is an owner at Vu NightSpot and was instrumental in bringing in events and bands such as Rep your City, Silverstein, Protest the Hero, Abandon All Ships, the Coldrift Video Release and Make it Rain NYE. He also supports many charity initiatives like Friends with Hearts.

Angie has many talents which were all harvested in 2014. She is a yoga entrepreneur, a musician, she performed at Lift-Off 2014 as a contortionist and even published her debut book, Apple Cores, last December. Some of her visual artwork was featured at The Art Galley of Cornwall.

Tracy’s new album (EP entitled Little Letters), did well in CBC competition this year. Tracy played Aultsville Theatre with Graham Greer for the YAC AGM, she headlined Hometown Series at the Social and also played a gig opening for the Graham Greer band at Lola’s. Tracy was the recipient of the Seekers Choice Award for Musical Artist of the year.

This man needs no introduction. Recipient of 3 Seekers Choice Awards for Visual Artist of the year, one in 2014, Jason opened his own downtown photography studio on Pitt Street last December. His photos were featured in Cornwall Living Magazine.

Bernard has been a photographer for over 40 years. In 2014, he was the recipient of the People’s Choice Award at The Art Gallery (TAG) Exhibit and also won an award at the Focus Art Exhibit at the Library. Bernard teaches photography courses at the College.

Congratulations on an amazing 2014!

Out and About - Happy New Year!