Interview with Amber Dawn Fox of the Walking Dead at CAPE 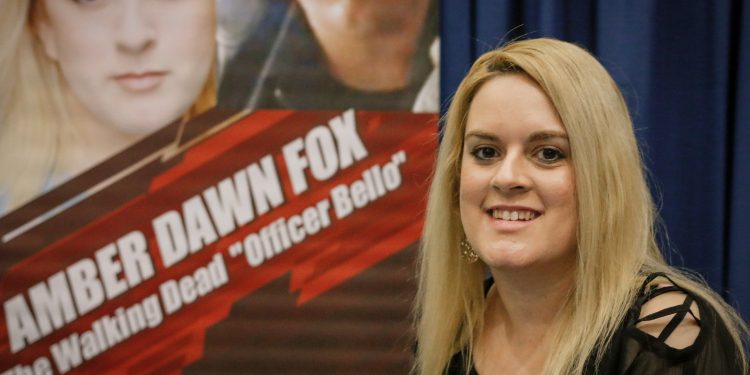 Interview and Photo by Jason Setnyk.

Cornwall Ontario — Amber Dawn Fox has appeared in TV shows like The Vampire Diaries, The Originals, Nashville, and Under The Dome. She also also appeared in movies like Dear John and Dumb and Dumber To. Most recently she has starred as Officer Bello in several episodes of Season 5 of the Walking Dead. She was a part of the mid-season finale scene when (spoiler alert) Beth dramatically and tragically dies.

Here is an exclusive interview by Jason Setnyk of The Seeker with Amber Dawn Fox at CAPE:

1 – Tell us about how you originally met the cast and crew of the Walking Dead?
I have been a fan of the Walking Dead since Season One. I was at a big convention over in the United States called Walker Stalker, but that was before I even landed the role.

2- What is it like being on set and working with the cast of the Walking Dead?
I was very excited to be there, everyone was very down to earth. With such a big show like that you don’t know what you are going to go into and whether you’ll have people with the big egos and all that stuff. Everyone I worked with was down to earth. The most interesting thing for me is this was the only set I had to drive through fans to get to work because they find out where the show is filming.

3 – Who is your favourite character on the Walking Dead and what was it like to met him or her?
Daryll. It was awesome. He’s a nice guy.

4- Do you think the success of the Walking Dead is because any character can die at any time?
Absolutely. It is pretty much the only show on television that does that. It keeps the fans interested.

5- Which characters were you most sad to see die over the seasons?
I would have to say Dale and Hershel.

6- What are your thoughts on the first ever CAPE here in Cornwall?
It’s exciting. I heard it is the first one.

Thank you Amber Dawn Fox for this interview.