by Editorial Board
in News and Announcements
Reading Time: 1 min read
38 0 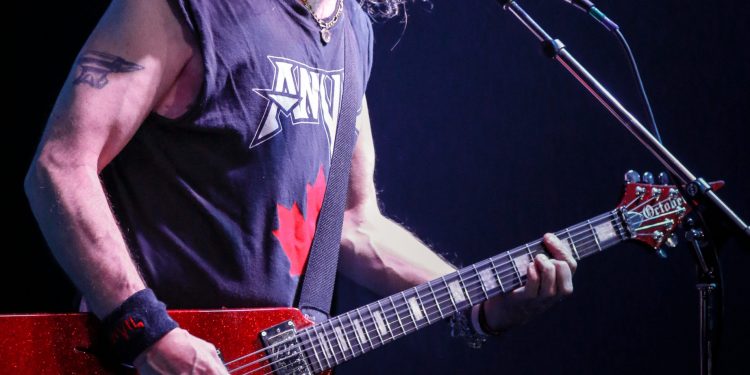 Cornwall Ontario — It was a night of nostalgia for fans of heavy metal music. Legendary heavy metal band Anvil played their first ever Cornwall concert Saturday night at the Port Theatre. The Toronto band, which has released 15 studio albums, formed in 1978 and their number one hit song “Metal on Metal” came out in 1982.

There were about 150 people out for the show to see original members Steve “Lips” Kudlow (vocals and guitar) and Robb Reiner (drums) joined by new member Chris Robertson (bass) play an energetic and fun set.

“I thought Anvil kicked ass at the Port! The heavy metal community in Cornwall is alive and well. I’d like to thank my friends at Black Moon and Larry Sylvain for working with me on bringing an amazing show to Cornwall and I would like thank the Port Theatre for the amazing venue”, said Cornwall music promoter and owner of Alkaline Entertainment Jeff Brunet.

Anvil has also invaded pop culture being heard in blockbuster movies, TV shows, and video games.  The band was the subject of a 2008 documentary film, “Anvil! The Story of Anvil” which garnered critical acclaim. Steve Kudlow (pictured here) and Robb Reiner also appeared on an episode of the TV show Sons of Anarchy.

The bands music has also been heard on the television show The Simpsons, movies like the Green Hornet and Final Destination, and on video games like Grand Theft Auto and Rock Band.

Opening the show was Ottawa band A Darker Day.

Bowser and Blue cause contagious chuckles at Cornwall Comedy Festival