Agapè’s truck gets a fresh look – with space for sponsorships

by Editorial Board
in News and Announcements
Reading Time: 3 mins read
21 1 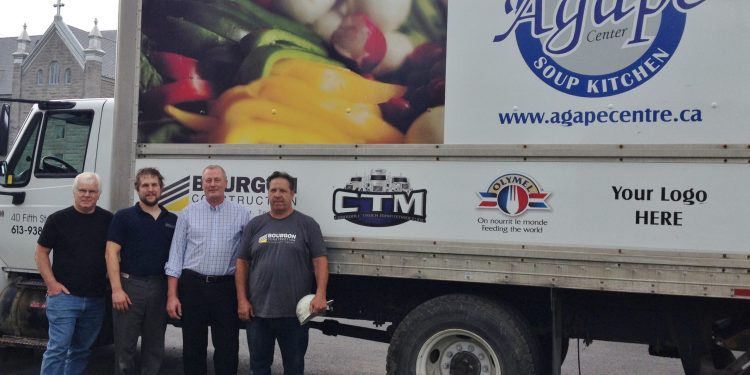 There’s a new way for businesses to help the Agapè Centre bring fresh food to people in need.

The local food bank, soup kitchen and thrift store’s pick-up and delivery truck was refinished with a large photo of fresh veggies and the charity’s logo on one side, and a display of the centre’s resale store on the other side.

“Since our truck travels around the city on a daily basis, it’s a moving billboard. It made sense to spruce it up in a way that shares our mission and vision, with space to generate some funding to support services through advertising,” said Johanne Gauthier, the Agapè Centre’s operations manager.

“Now the truck showcases what we are all about: good, fresh food driven by community support,” she said.

Between repairs, maintenance, fuel and insurance, it costs more than $12,000 to keep the vehicle on the road for a year. So the seven advertising spots on the truck will cover the annual operating costs, and then some.

The truck use has significantly changed over the past year.

“Before, it was mostly used to pick up donations for the thrift store. But now it is being used primarily for picking up fresh food for the food bank, soup kitchen, and some of our food programs such as TLC (Teach and Learn with your Child at the Early Years Centre) and the Curious Chefs program,” said Gauthier.

So far, the local non-profit has four businesses on board: Bourgon Construction, Olymel, Cornwall Truck Maintenance, and Marleau Mechanical.

“Bourgon Construction is pleased to be involved in the restoration and renovation of the Agapè Centre’s building and are proud to support the excellent work they do for the community,” said the construction company’s  President and Project Manager, Chris Markell.

The Agapè Centre says it will provide great care to ensure that the advertising spaces are not sold to two competing businesses.

“We’re the biggest food manufacturer in town, so it makes sense to support the food bank,” said Jay Willyard, plant manager of Olymel.

Gerry ten Brink has been driving the Agapè Centre’s truck for eight years, and enjoys the opportunity to get out into the community and meet the people Agapè works with.

“The truck brings visibility and awareness to what we’re doing, so the sponsorships are a great way to show the community involvement of the businesses in the area,” he said.

Jason Pascheck, owner of Cornwall Truck Maintenance, explained that his company sets aside funds in the budget to support charities.

“Our father believed in giving back to the community and started donating to Agape years ago, and it has been a part of our business’ core belief. We’ve also been helping with Agape’s truck maintenance for years,” he said

There are only three spaces left, so any company hoping to see its logo traveling around the city every weekday, will have to act fast. The agreements are renewable on an annual basis.

“By buying an ad space on the vehicle, sponsors are directly helping us bring fresh food to local people,” said Gauthier.

The local non-profit also hopes the fresh look will help people to become more familiar with its thrift store that was rebranded last fall to the name ‘New For You’. Its sales provide a large portion of the Agapè Centre’s operating budget.

For more information about the sponsorship program, contact Johanne Gauthier at 613-938-9297 ext. 27 or [email protected].