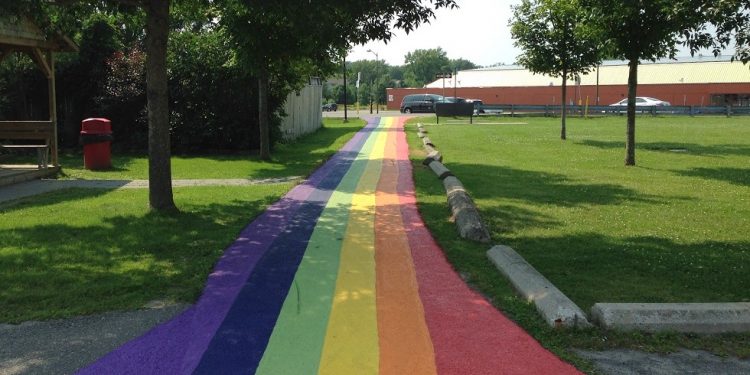 Update (4pm): A SLC Professor is no longer employed with the college after making alleged homophobic comments on Facebook. Coupland has not responded to media request by the National Post or CBC and he has not issued a statement. However this was posted on the St. Lawrence College Facebook page:

As a result of complaints about comments made on social media that were brought forward to the College, this matter was investigated internally. Mr. Coupland is no longer an employee at St. Lawrence College.

Kingston Ontario — Rick Coupland, a business teacher at the the Kingston campus of St. Lawrence college, is under investigation for alleged homophobic comments he made on Facebook.

In this screen-shot it allegedly shows Rick Coupland sharing a video about a rainbow flag and adding some disturbing commentary: “It’s the queers they should be hanging, not the flag.”

It was reported that a former student saw the comment made by Coupland, took a screen-shot, and then proceeded to make a formal complaint to the college administration.

The college made a statement on their Facebook page in which they indicated that they have strict polices for employee conduct and that they are committed to creating a community of inclusiveness.

The college recently completed a “Rainbow Way” at its Brockville campus. Both the Kingston and Cornwall campus can expect a “Rainbow Way” too as indicated in the statement below.

Cornwall Ontario City Councillor Carilyne Hébert who works in the field of online education and job training was in Brockville recently for a Pride Festival.

“Unfortunately I was not able to visit Rainbow Way while I was in Brockville to celebrate their 5th Pride Festival. I am thrilled to hear that St-Lawrence College is looking to add a Rainbow Way to both the Kingston and Cornwall College. I think it’s important for educational institutions, government offices, businesses, healthcare facilities and any other employer or service provider to show that they are a safe, inclusive space. I hope to see our municipality work with the college to see this important project come to fruition”, says Hébert.

Brockville City Councillor Leigh Bursey explains the origins of the Rainbow Way in an interview to the Seeker.

“The Rainbow Way originated from my proposal, as both co-chair of this year’s Brockville Pride, and a proud member of the St. Lawrence College family. The walkway is actually the longest rainbow walkway in Canada, stretching 119 feet, and is a project I am remarkably proud of. we have also made it clear on a national stage that Brockville is a more inclusive and more credible supporter of social and cultural diversity. This walkway is a simple design, but is by and large, something I am very proud of. This new project has brought great joy to many and has become a unique tourist destination. I can also tell you with certainty that many people are interested in seeing those efforts duplicated in Cornwall, Kingston, and as far away as Ottawa”, says Bursey.

The date of completion for a Cornwall Rainbow Way has not been announced yet.

Here is the statement that was posted on the St. Lawrence College Facebook page:

Recently we have become aware of comments allegedly made on social media by a member of our college staff. We are currently investigating this situation. Because this is a personnel matter we cannot comment further at this time.

The College has strict policies which guide the conduct of our college employees. The comments made on social media in this situation are not a reflection of our college values.

The College is proud of its inclusive community. We recently completed a ‘rainbow way’ on the Brockville campus, a Pride rainbow which is one symbol of our inclusive environment. We will be expanding the ‘rainbow way’ to all three of our campuses in the near future.

Enter to Win a Rib Dinner!