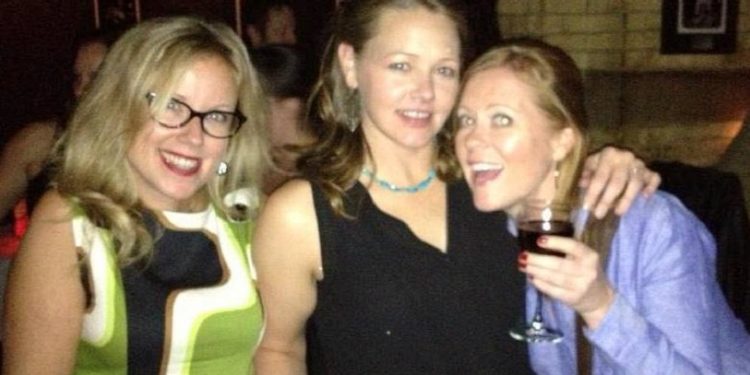 Jen Grant has achieved virtually everything you can achieve in the world of stand-up comedy in Canada. She has performed at every major comedy festival in the country including the Just for Laughs Festival, the Halifax Comedy Festival, and the Winnipeg Comedy Festival. All of which have aired on national television. She can also be
heard on CBC‘s “The Debaters” and has her own TV special on The Comedy Network. Now living in Toronto, Jen lived in New York City from 2008-2011 and had the opportunity to play major comedy clubs with such legends as Jim Bruer, Robert Klein and Louis CK.

Christina Walkinshaw is a stand up comic living in Toronto, she had a half hour comedy special on TV, and she was nominated for Best Female Stand Up Comic at the 2012 Canadian Comedy Awards.

Rebecca Kohler won best live taping at the Canadian Comedy Awards in 2013, and she was also voted best female standup by a Best of Toronto readers poll.

Erica Sigurdson is best known for her wit on CBC Radio’s smash hit The Debaters. She is in high demand for radio, television and live appearances.In addition to her twenty-seven appearances on The Debaters, Erica has recorded five television specials in 2013 alone. Her comedy festival credits include Monteral Just for Laughts, The Winnipeg Comedy Festival, the Halifax Comedy Festival, the Vancouver Comedy Festival, and many others. In 2007 Erica was awarded a Leo Award for Best Comedy Screenwriting, along with co-writer Peter Kelamis, for her writing on the 21st Annual Gemini Awards.

Tickets are $20 and available at Floral Expression, Melody Music, and Deke and Squeaks.

Is Sexism still Accepted in Comedy? By Mark Vincent

Mark Vincent writes: I have never performed on or promoted an “all male comedy show”, so why is it that we automatically promote a show featuring 4 headliners who all have received national notoriety, performed across the world, and blew the roof off countless comedy clubs across North America as an “all women show”. Why must gender be emphasized or even matter in 2015?

“My Jokes are Up Here” is an all women show that features Jen Grant, Christina Walkinshaw, Rebecca Kohler, and Erica Sigurdson. Together they have over 60 years experience performing comedy. “Our collective experience could receive the seniors discount at Shoppers Drugmart” jokes Jen Grant

“You are so funny for a women”, “I normally don’t find women funny, but you were hilarious”. These statement are heard far too often by headliner Jen Grant. “People don’t realize how insulting these statement are” explained Jen stating “they are assuming I won’t be funny, just because I am a female comic”. Jen has appeared on CBC’s Debaters countless times, has her own Comedy Now special that airs regularly on the comedy network, entertained the troups in Egypt and Israel and still has to deal with the stereotype of being a female comic. “A comedy club owner told me that people cancel their reservations when they see a female is headlining” added Jen .Why should someones gender matter in comedy? “Funny is funny” says Jen with a smile. If the comic is one of the best in the industry does gender matter? “It is one of the last places where sexism seems to be widely accepted, I just don’t get it” Jen continues to explain.

Jen received national attention over her blog “I was sexually harassed at work”. Where she recalls a situation on stage at a private corporate event that no person should find themselves in. “It was the first time in my 16 year career I was scared on stage” explains Jen. Her blog reached over 3 million views. It’s sad to me to see a brilliant comic who has accomplished more than most in the world of stand up comedy receiving more attention for being sexually harassed on stage than for what she does best, being one of the top stand up comics in Canada, regardless of gender. “It doesn’t bother me really, I didn’t expect my blog to go viral or receive this much attention, I was just writing about my life, but I’m glad the message is out there” says Jen.

Don’t miss this show. Don’t miss these four women. Not because it’s an all female show, not because of girl power. Don’t miss this show because they are four elite comics who have all appeared on national television multiple times, all performed many Just for laughs festivals, and who are all on top of their field and will prove it on September 11th at Deke & Squeaks. Show starts at 8pm, tickets are $20 and available at Melody Music, Floral Expressions, and Deke & Squeaks.