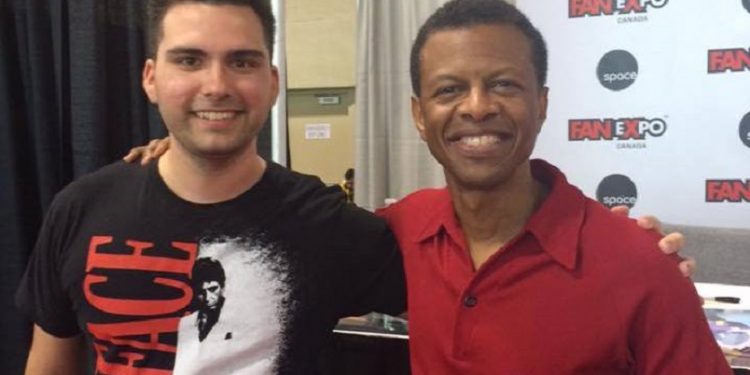 Toronto Ontario — Josh Welsh, an aspiring actor from Cornwall Ontario, attended Toronto Fan Expo on September 5th, and met some of his favourite stars including Phil LaMarr (pictured above) and Neve Campbell.

I met Phil LaMarr at the Toronto Fan Expo yesterday afternoon. I introduced myself, told him I was a big fan of his work (he voices in Family Guy, Futurama, appeared in Pulp Fiction alongside Samuel L. Jackson and John Travolta, as well as voiced in many video games). In the morning, he and other voice actors from TV shows and video games, did a script read through from Back to the Future, which was very entertaining to watch. I told him I played the Star Wars games in which he did voices for and then proceeded to show me his Star Wars badges he has from the 501st infantry and work. I asked him about his work with Seth MacFarlane from Family Guy & Futurama and told me he was a great guy to work with. He is so crucial and hilarious that he has to go elsewhere to record his lines for the show. I told him I was an aspiring and training actor myself and he wished me the best of luck with my training and career. Phil was a pleasure to talk to, down to earth and a humble being.

After taking my photo with Phil LaMarr and wishing him all the best, I got a chance to speak with another voice actor, Grey Delisle. She was just the same as Phil, very humble and down to earth, interested in everything I had to say. I also told her I was a big fan of her work in the Star Wars games franchise (I play a lot of Star Wars). She is also well known for her work in Fairly Odd Parents, Disney’s The Weekenders (with Phil LaMarr), and the Batman: Arkham series video games, with many other credits to her name.

Last but not least, I spoke to Neve Campbell, Skeet Ulrich and Roger L. Jackson from the Scream franchise. I told each of them that I was a big fan of the movies. I asked Neve if there was any news for a Scream 5 and she said “No, probably not.” Sorry, Scream fans! With the latest passing of Wes Craven, I asked Skeet if there was a memorial and funeral planned for him and he told me next Wednesday, where they will all be in attendance. However, they all enjoyed their time in Toronto and hope to return next year for Scream’s 20th anniversary.