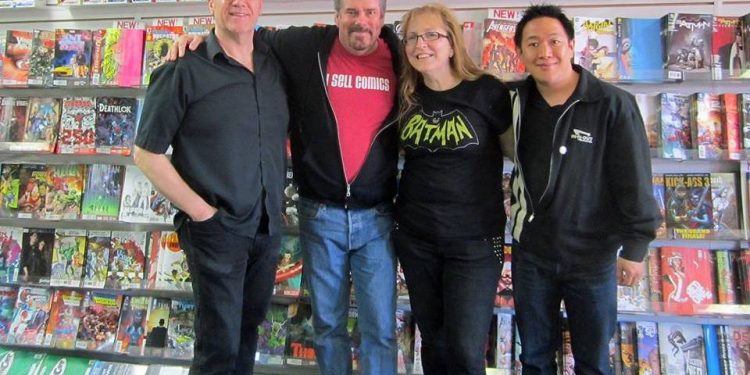 Cornwall Ontario — Randy Sauve is the owner of Fantasy Realm and a co-founder of the Cornwall & Area Pop Event (CAPE). In 2016 several actors from the Kevin Smith movie Clerks will be celebrity guests at CAPE. Randy reflects about his first job as a clerk, how he was able to relate to the Kevin Smith film entitled Clerks, and the journey of creating CAPE with Carol Grant and getting celebrity guests to attend.

My first “real” job was in 1976 working for Carl and Kathryn McLaughlin at Carl’s Smoke and Gift Shop at 272 Pitt Street in Cornwall, ON. As a fifteen year old, I had spent so much time hanging around the comic spinner and magazine rack that Carl finally offered me employment. I started off doing small jobs like filling the cooler, unpacking orders, stocking shelves, and so on until that fateful day when they decided to train me on the cash register and make me a bona fide clerk. The shop had a diverse group of casual and regular customers, the usual product sales reps and many downtown business owners, all of who bought a lot of cigarettes, soft drinks and lotto tickets. When I saw Kevin Smith’s Clerks upon release in 1994 there was a cool factor about it as it reminded me of my few years working behind the counter at the smoke shop. There was a lot of familiarity like the girlfriend issues, the salesmen (lots of salesmen), the nightly friend visits, the usual suspects from Bundy’s Pool Hall, and of course the “regulars”.

When I finally opened Fantasy Realm in 1985 I slowly began to have my very own diverse customer base and as time passed I heard in 1997 that Smith had purchased the comic shop in his hometown that he frequented and put Walt Flanagan in charge of the newly named Jay & Silent Bob’s Secret Stash. When the Comic Book Men premiered on
AMC in 2012, a series described as Pawn Stars for geeks featuring the staff of the Secret Stash (Walt, Brian, Ming, Michael, and Kevin), watching it from my point of view was like still being at the Realm, more familiarity.

Carol and I were at Niagara Falls Comic Con in June 2014 where we got to meet the Comic Book Men, and I have to admit feeling starstruck in the presence of those guys, it was a very surreal moment. A few months later Carol and I began putting plans in motion for Cornwall & Area Pop Event – CAPE, Carol suggested to me that we should
invite the Comic Book Men to CAPE, to which I said “You’re not going to convince the Comic Book Men to come to CAPE!” Well, I’ve learned to never underestimate the driving force of an event planner. Ming and Mike came to CAPE in April, they were a huge hit and they also visited the Realm (more surrealism there I tell ya).

This past June I watched Kevin Smith’s newest movie Tusk (2014 film), and loved it. I don’t want to give anything away, but seeing Kevin Smith and Johnny Depp’s daughters in brief roles playing the next gen clerks was simply fantastic, and knowing they will be back as the two Colleens in Smith’s upcoming “Yoga Hosers” just added to the idea to invite cast members from the movie “Clerks” to be guests at CAPE 2016. With the realization that some of the View Askewniverse stars were appearing at conventions, it was just a matter of inquiring. I expect there will be a large appeal for the next gen clerks that will certainly create more interest to where it all began in 1994.

Taking the opportunity to visit the Stash and Quick Stop Groceries this past September certainly was a “bucket list” worthy trip along with seeing Brian O’Halloran and Scott Schiaffo at Vermont Comic Con. Carol and I are so unbelievably ecstatic to bring them together with Marilyn Ghigliotti in just 186 days for CLERKS @ CAPE, and by
the way this will be the first time they have been together at a con in Canada. Cape 2016 will serve as two anniversaries, for myself I’ll be celebrating 40 years since I worked as a clerk at Carl’s Smoke Shop and for Carol and I it will be our wedding day.

The second annual CAPE takes place on April 23rd and April 24th 2016 at the Benson Centre.