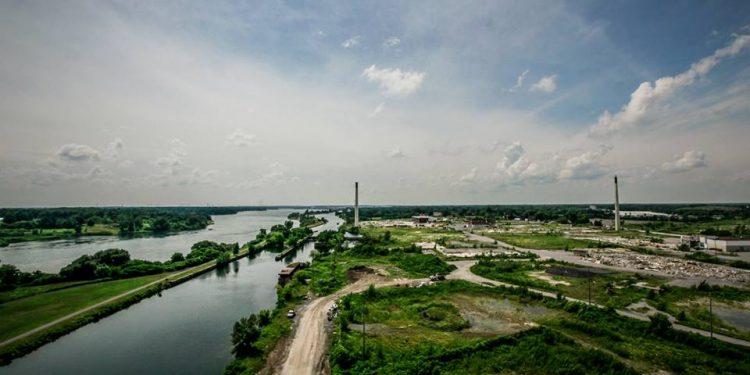 Read more about the plan to dump 3200 Olympic sized swimming pools of waste into the river here.

“This is obviously an incredibly unfortunate situation. The City of Montreal’s decision is demonstrative of the need for improved infrastructure for Canada’s municipalities, and the need for a real federal partner. A Liberal government will invest an additional $20 billion over the next ten years in green infrastructure, which includes water and wastewater facilities. By investing in wastewater management, we will make sure that municipalities won’t be forced to dump raw sewage into our rivers, putting the health of nearby communities and ecosystems at risk”, says Bernadette Clement.

Burger says the NDP is also committed to investing money for municipal infrastructure. Burger is also concerned by the slashing of Environment Canada’s budget. Environment Canada needs to approve the plan by the City of Montreal before the dumping begins.

“The Montreal dumping of 8 billion litres of untreated sewage into the St. Lawrence River over approximately a week starting Oct. 18, is a tragedy. Not only for the environment, but because of the rationale that it can be done because it has been done before. Using precedent to justify such an action means the same can happen in the future.

When speaking with Jeff Ridal, the executive director of the St. Lawrence River Institute, on this subject he pointed out that the rationale that the river dilution capacity will take care of things is not really sufficient. In truth, the Montreal sewage plume is visible from the sky and the effluent from Montreal’s waste will be full of pharmaceuticals, heavy metals, and a multitude of other contaminants. This will inevitably end up somewhere downstream of the island where it will become part of the sediment and effect fish populations. Furthermore, the increased nutrient value in the water can cause a blue green algae bloom which can contaminate drinking water downstream – SDSG is up-stream from Montreal.

It is clear that the slashing of Environment Canada’s budget, which by 2016 will be half of what it was in 2007, does not provide enough financial or human resources to ensure environmental assessment will be compressive or effective. This is just further evidence of how the Harper government cares little about the Canadian public, but focusses more on ensuring environmental assessment and regulation will not deter business that can be detrimental to the environment.

Protecting the health and safety of Canadians is a key responsibility of the federal government. The issue at hand is that there was not enough forward thinking or planning being done. What has caused this situation is an infrastructure issue. It is clear that there would have been prior knowledge of the need for demolition of the area under the Bonaventure Expressway. An assessment of the demolition job would have determined the need to remove the major sewer interceptor, into which other sewer lines flow. Why didn’t they prepare for this when they knew it was going to be needed? Money. We need money for infrastructure and an NDP government will provide a 3 billion dollar investment over four years to further combat issues such as this. This investment includes supporting priority municipal projects by increasing federal transfers for infrastructure projects to the tune of 420 million dollars in the first year of forming government”, says Burger.

“There should be no physical impact to Cornwall and area since the flow of the St. Lawrence River will take this sewage downstream to residents in Quebec and on to the Ocean. However, since Environment Canada has known about this for a year and did not explain its assessment of the project, I don’t like either the timing of the announcement nor the content of the announcement.  Has this been another case of scientists not being allowed to tell us what is happening and why they are allowing it? The real impact on us here, is the knowledge that we can’t trust that our government is looking after the health of our communities or our River”, says Kennedy.

MP Guy Lauzon (Conservative) has not responded at press time. This article will be updated when and if he responds to this topic.

Do you support or oppose this plan?

The River Institute is not in favour of the proposed discharge plan by the City of Montreal for two reasons: (1) it will discharge materials into the St. Lawrence River including sanitary materials and particulate matter that are normally removed by wastewater treatment and that have the potential to negatively affect the river; and (2) it sends a very conflicting message to the general public and other dischargers that certain entities are allowed to release raw waste while at the same time others are not. For instance, it is very difficult to imagine the Ministry allowing an industrial plant to discharge this volume of raw sewage into a water body as a result of a maintenance project.

An overarching concern respecting this situation is the decision-making process that has led us to this point of perceived “no other option” for the City of Montreal. We would be interested to know about the decisions made during the project planning process; surely it was recognized at the earliest stages of the project that the need for wastewater diversion would occur. What options for diversion and treatment were explored prior to opting for a direct discharge and what was the decision process?

What impact might this have on the local environment especially for Cornwall and other near by communities along the river?

As the discharge event would be downstream of Cornwall and nearby river communities (i.e. it will flow from Montreal towards Quebec City), we cannot envisage impacts to the local ecosystem. Some of the leading scientists who have studied the Montreal sewage plume and its impacts on the St. Lawrence River have provided a statement concerning potential impacts of this discharge event through the Groupe de Recherche InterUniversitaire en Limnologie. The main effects are expected to be related to the additional discharges of particulate matter and sanitary materials that would normally be removed by the wastewater treatment plant, including the deposition of these unsightly materials in downstream areas.  The GRIL scientists do point out however that these effects may be incrementally small given that the river flow is very large (approximately 7000-8000 cubic metres per second) relative to the expected rate of discharge (13 m3/s). The proposed discharge will occur at 26 points along the south shore of the island of Montreal.

Additionally, it must be recognized that the Montreal wastewater treatment plant does not disinfect the treated wastewater that is discharged into the River and therefore does not remove pathogens associated with the discharge. As well, only small percentages of the pharmaceuticals and other potential endocrine disrupting substances in the wastewater are removed by the existing wastewater treatment plant. In this context, this proposed discharge represents a small impact relative to the continuous discharge from the existing treatment system and focus should be placed on upgrading this system to reduce the continuous discharges that occur. The GRIL scientists also point out that during rain events there are discharges from combined sewer overflows directly to the river (this occurs in many places throughout the Great Lakes and St. Lawrence River) and therefore the public should be aware that some direct discharge of sewage to the river is not uncommon.

Furthermore, do you think cuts to Environment Canada will impact their ability to do a proper assessment of the risk?

Our view is that Environment Canada retains the necessary people, particularly at the Centre St. Laurent based in Montreal, that have the capacity to undertake a proper risk assessment related to the proposed discharges. However, it may be that cuts at EC have impacted their ability to undertake this assessment in a timely manner; we are unable to determine whether this is the case as it depends on individual case loads and management priorities at EC.