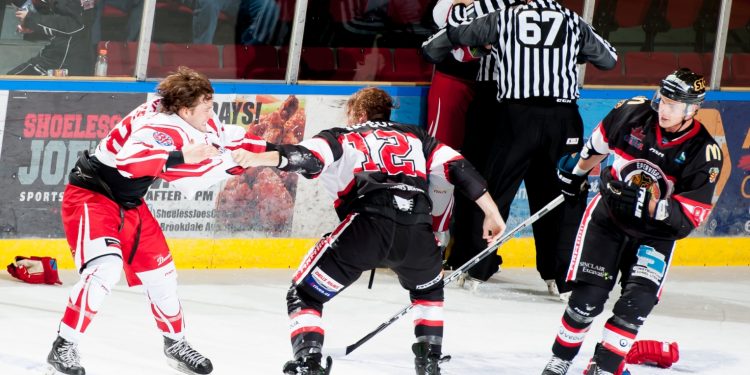 In five games with the Eperviers this season, Pard has two goals and an assist.

The 25-year-old Pard recently played three seasons alongside River Kings forward David Croteau overseas in France. Croteau has yet to make his debut with Cornwall due to injury.

Therrien only appeared in one game for the River Kings this season.

SUNDAY: The River Kings sent a message to the Sorel-Tracy Eperviers on Sunday afternoon at the Civic Complex.

Cornwall dropped the contest 3-0 in front of 791 fans, but proved they weren’t going down without a fight. The chippy contest featured six scraps as frustration clearly set in for the River Kings (0-7-1) on this afternoon.

Vincent Couture opened the scoring for Sorel at 7:38 of the first when his one-timer off the faceoff beat River Kings goaltender Charlie Lavigne. Etienne Brodeur gave the Eperviers a two-goal lead when Sorel capitalized on a two-on-one at 15:05 of the first.

Marco Charpentier beat a sprawling Lavigne for a powerplay goal at 7:51 of the second.

Then, with 7:13 to play in the middle frame, a line brawl broke out as Francis Lessard, Tidball, Jonathan Jasper and Frederick Cote took fighting majors. Lessard was assessed a five-minute major for being the aggressor.

Cornwall responded with a better third period, outshooting the Eperviers 12-10. The River Kings couldn’t beat Mathieu Dugas, however, who posted the shutout with 28 saves overall.

FRIDAY: At St-Georges, the River Kings picked up their first point of the season before ultimately falling 4-3 in a shootout to the Cool FM. Caron scored twice, including the game-tying goal mid-way through the third, and Sy Nutkevitch had a single for Cornwall. Lavigne was solid in goal for the River Kings; he made 36 stops before turning aside 3-of-4 shootout attempts.