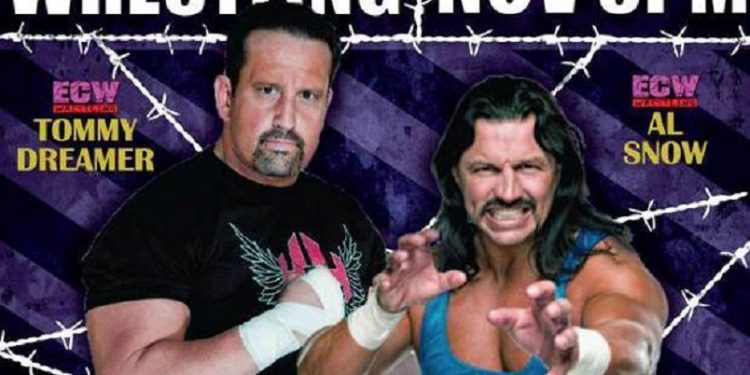 Cornwall Ontario — What do Cornwall wrestling fans want? Cornwall wrestling fans want head. When are Cornwall wrestling fans going to get head? Cornwall wrestling fans are going to get head on Saturday, November 21st, 2015 when Al Snow and Tommy Dreamer come to Cornwall to wrestle in the main event at the Agora Centre.
The slogan “head” became synonymous with Al Snow when he started bringing a mannequin head to the wrestling ring in the 1990s. Fans would shout “head, head, head”.
Al Snow (Allen Ray Sarven) is a former WWE, ECW, and TNA wrestler. He is a six time WWE Hardcore Champion, one time WWE European Champion, and one time WWE tag-team champion pairing with Mankind (aka Mick Foley).
Tommy Dreamer (Thomas James Laughlin) is also a WWE, ECW, and TNA wrestling alumni. He is a two time ECW Champion, three time ECW Tag Team Champion, and 14 time WWE Hardcore Champion. He is well known for wrestling fueds with the Raven, Sandman, and The Dudley Boyz.
The main event of MPW’s Extreme Measures will feature both hardcore wrestling legends. Al Snow and Tommy Dreamer will be teaming up with MPW Champion Joey Valentyne to face off against Randy “The Rage” Berry, Payne and Ray Steele.
Bell time is at 8pm. Advanced tickets are $15, or $20 at the door. A family pack for four is $50. Tickets are available at Nativity Bowling, Poppy’s Pawn Shop, and Floral Expressions. This event is a benefit to raise money for Open Hands, which is ss a local residential centre designed specifically to help fulfill the needs of developmentally disabled adults and children.