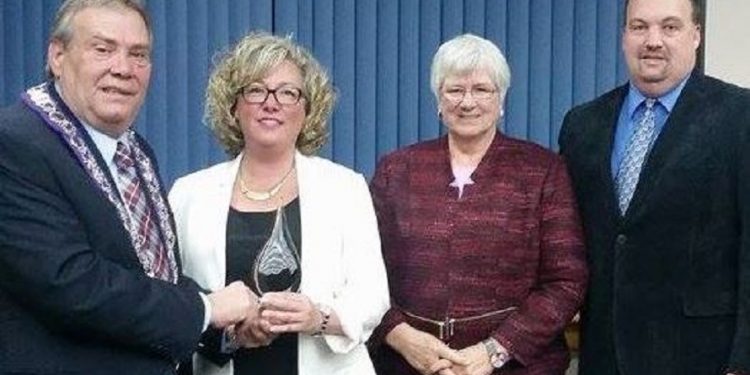 Cornwall Ontario — Deputy City Clerk Manon Levesque has been recognized with a special award from a provincial organization for her efforts in making Cornwall a more accessible community.

OPINION: I CAME, I SAW AND SO WHAT…

Did you know that Halotherapy can help protect you from COVID-19?

Ms. Levesque was presented with the AODA Champion Award from the Association of Municipal Clerks and Treasurers of Ontario (AMCTO) during the regular City Council meeting on Monday, November 23rd.

Over the past 10-plus years, Ms. Levesque has played a key role in integrating accessibility standards into the fabric of the City of Cornwall.

“Thanks in part to the hard work and dedication of Ms. Levesque, Cornwall is now much closer to becoming a barrier-free community and we have a viable plan to help us make it the rest of the way,” said Mayor Leslie O’Shaughnessy prior to presenting the award to Ms. Levesque.

In accepting the award, Ms. Levesque was quick to thank Council and Administration as well as members of the Municipal Accessibility Advisory Committee (MAAC) for their continued support

It’s been 10 years since the Accessibility for Ontarians with Disabilities Act (AODA) came into effect, and in that time, the City has made tremendous gains on accessibility.

“We have become known as one of the leaders in the province on accessibility issues,” said Ms. Levesque.

OPINION: I CAME, I SAW AND SO WHAT…

Did you know that Halotherapy can help protect you from COVID-19?