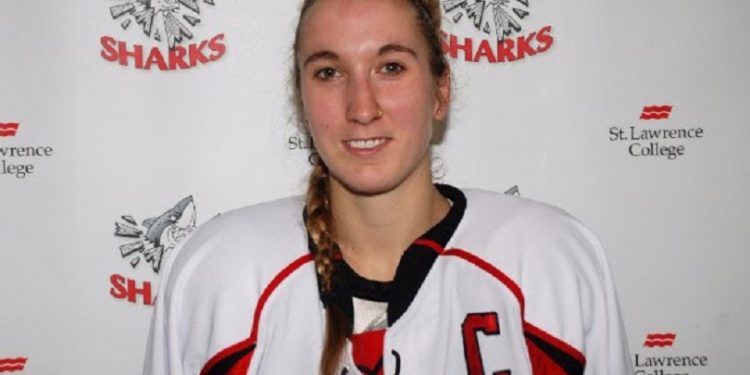 Cornwall Ontario — Hockey player Renee Lortie was named the SLC Cornwall 2014-2015 Female Athlete of the Year. Renee Lortie is back for a second year in a Sharks Uniform, but this time wearing the “C” on her jersey. The new captain of the Sharks Women’s Hockey Team was named Athlete of the Week at St. Lawrence College.

Renee and the Sharks squad opened the season with the Georgian College Invitational where the Sharks went 2-0 in the preliminary round, won 6-0 against the host Georgian Grizzlies but ran into a hot goaltender in the semi-finals, losing 2-0.

Lortie finished with a team high six points, including scoring in the shootout against Conestoga College. Lortie brought a calm and determined leadership quality this season that will be important throughout the season.

Lortie won the championship for Women’s DIII hockey in the United States playing for Norwich University. She is also an alumni of the Ontario Hockey Academy based out of Cornwall Ontario.