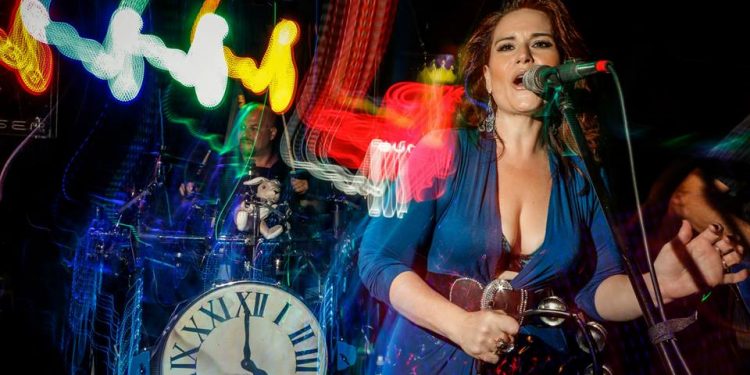 Cornwall Ontario — Ho, ho, ho! Cornwall music fans can be very merry, because tis the season for live music! November ended on a high note with a concert by Mandee Woods who played (last night) at the Jets Set Pub. There are a few dozen concerts happening this December, from rock, to hip hop, indie, to metal, country, jazz, folk, acoustic and more. Here are your Cornwall music listings for the month of December.

–Friday December 4th – Juno award winning blues band MonkeyJunk will be playing at the Port Theatre. Opening the show is special guest Anna Marie Newton (pictured here). The show starts at 7pm, is all ages and licensed, and tickets are available $15 in advance or $20 the day of the event.

–Friday December 4th – Sean Harley is playing live at the Jet Set Pub at Nav Centre. The concert starts at 7pm and is free admission.

–Saturday December 5th – Live hip hop will return to Cornwall with an epic concert at La Maison Tavern. See CMO, Grey Matter, Rook, SMP, Thefreakboy, Karma, Teknikal, BMV, Illusion, Samson, and Karma (Pictured here). The event is hosted by Mr. Vicious. Doors open at 7pm. There is a spoken word at 7pm and an 8 Man Battle at 10:30pm. Tickets are available at La Maison for $10.

–Saturday December 5th – Roxanne Delage plays live at Schnitzels at 8pm. She is a singer/songwriter whose original music defies genre classification, with country, folk, pop, rock, blues and jazz flavours. After three decades of honing her craft in the theatre and fronting a number cover bands, she released her first CD of original music, The Way I Am.

–Friday December 11th and Saturday December 12th – Meet legendary music photographer Barrie Wentzell at The Art Gallery (TAG). He was the official photographer for Melody Maker magazine in Swinging London from 1965 to 1975. He photographed music legends from John Lennon, to Jimi Hendrix, to Johnny Cash and many others. Barrie will be in attendance on Friday December 11th (Party and Gala) and Saturday December 12th, 2015 (signings). It is perhaps only appropriate that there will be live music on both days. On Friday Moses Lasata is performing in the gallery, and on Saturday Sean Harley of the Trench Town Oddities has a set.

–Friday December 11th – Metal fans rejoice, because there is an amazing concert lined up at La Maison Tavern. The show features The Observer Effect, Bookakee, Here Comes Bigfoot, and Grey lights. Tickets are $10 in advance or $12 at the door. The show starts at 7pm.

–Friday December 11th – Chris Benton is playing live at the Jet Set Pub at Nav Centre. The concert starts at 7pm and is free admission.

–Saturday December 12th – Classic Soul, featuring Allan McGimpsey (pictured on the left) and Shelley Harley-Green, are playing live at the Jet Set Pub at Nav Centre. The concert starts at 7pm and is free admission.

–Saturday December 12th – Canada’s top tribute to The Beatles HELP! will be playing live at the Port Theatre. The event starts at 7pm, the show is all ages and licensed, and tickets are $25. Tickets are available at The Port Theatre during movie hours, and at Melody Music, Lotto Kiosk At The Cornwall Square and St Lawrence Appliance Service. Re-live Beatlemania: step into a time machine with HELP! and experience the Fab Four Live! Pictured above are another Beatles tribute band (Revolution) that played a concert here the previous year.

–Saturday December 12th – The Bard of Cornwall Jesse Ferguson is playing live at the Jet Set Pub at Nav Centre. The concert starts at 6pm and is free admission.

–Thursday December 17th – Switchgear will be playing live at Rems Tap House. Every Thursday at Rems is “$5 Thursdays” with everything on the menu and all draft beer for only $5. The music starts at 8pm.

–Thursday December 17th – Kick off your Christmas holidays with Kelsey’s! See live music from Jerin with Nate Gignic (ex-Fathom Ties, pictured on the right). The event features half price wings, $5 drink deals, Labatt gift basket giveaways, and a food drive and 50/50 draw for Friends With Hearts of Cornwall!

–Friday December 18th – Switchgear are playing live at the Jet Set Pub at Nav Centre. The concert starts at 7pm and is free admission.

–Saturday December 19th – It’s that time of year again and “Spirit of a Season” is back with another stellar eclectic lineup of comedians and musical entertainment! See comedian Jacy LaFontaine, Chris Venditto, plus acoustic music by Chuch LeClair and Ben Dynamite. There will also be rock music by 21 Guns and Doctor Mom. The event takes place at La Maison Tavern, the cover is $5, and doors open at 9pm.

–Saturday December 19th – The Rod Squad, The Camil Lapointe Trio, and the Duo of Camil and Rod will be playing live at Lola’s Pub. Help relieve holiday stress with a night of great entertainment. The show starts at 9:30pm.

–Sunday December 27th – Us With Wolves (ex Bryden Avenue) play their farewell show at the Port Theatre. The show, which starts at 7pm, is all ages and licensed and admission is $10. Opening the show is Paul Harrison. The band Us With Wolves have played over a hundred shows and features Ryan McGillis, Taylor Campbell, Ryan Cornett and Martin Potvin. Submitted Photo.

–Thursday December 31st – Ring in the new year with a fundraiser for the Cornwall & Area Pop Event (CAPE). See The Lost Boyz and Spare Partz. Tickets for couples are $60 or single tickets can be purchased for $30. Costumes are encouraged but optional. The event takes place at the Agora Centre (former Nativity Hall) and it starts at 8pm. Advanced tickets are available at Fantasy Realm.

–Thursday December 31st – Trench Town Oddities are playing live at the Jet Set Pub at Nav Centre to bring in the new year. $25 admission or $85 for the meal and NYE bash.

–Thursday December 31st – Alison Wonderland are playing live at the Civic Complex. Tickets are $80 and include passed canapes and a signature drink, a four course gourmet dinner featuring filet mignon and shrimp, champagne toast at midnight and a late lunch. It’s called “A Night In Hollywood” … A New Year’s Eve Gala. It is benefitting the Optimist Club of Cornwall and the Cornwall and District Service Club Council’s pledge to expand children and youth’s mental health services in Cornwall & SD&G. There will also be a DJ.

–Thursday December 31st – Rock Bottom will be ringing in the New Yewar at La Maison Tavern. Enjoy covers of Melodic Rock, Power Rock, Classic Rock, New wave, and Hair Metal. Doors are at 9pm and tickets are $20 ib advance or $25 at the door.

–Thursday December 31st – Country fans can ring in the new year with Switchgear at the Golf and Country Club.

Just a reminder to find a safe ride home, and to never drink and drive. Happy Holidays!