by Khyle
in News and Announcements
Reading Time: 1 min read
25 1 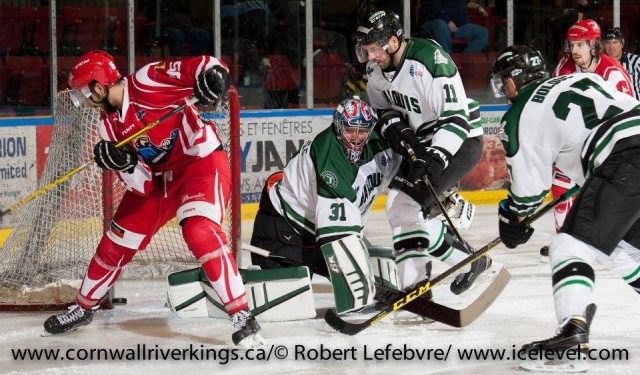 JONQUIERE – The Marquis scored five straight goals in the third period en route to a 5-4 victory over the River Kings on Friday night.

Jonquiere now has a commanding 3-0 lead in the best-of-seven series. Game 4 is Saturday night at the Civic Complex.

Cornwall built a 3-0 lead after 40 minutes of play on goals by Nicholas Pard, Francois Ouimet and Nicolas Larocque-Marcoux.

But Jonquiere took over in the third, to the delight of the 1,961 fans in attendance. Peter James Corsi led the Marquis attack with a two-goal performance.

Eric Satim scored with 24 seconds to play for Cornwall, but it was too little too late.

Charles Corsi made 28 saves but was tagged with the loss in goal for the River Kings.