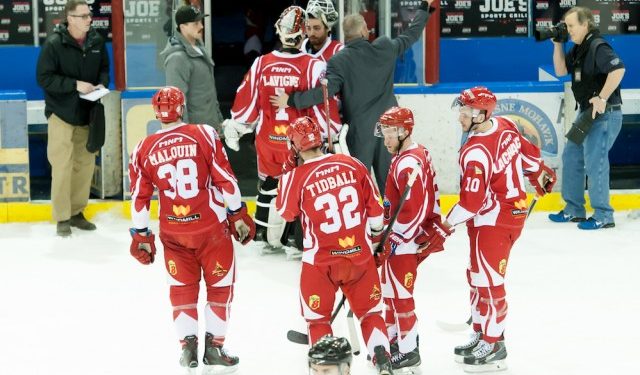 CORNWALL – The River Kings season came to an end on Saturday night in front of 669 fans at the Civic Complex. Jonquiere skated to a 4-3 overtime victory to sweep Cornwall in four games.

Jeremy Vigneault-Belanger was the hero, scoring at 10:42 of the extra session. Moments before the Jonquiere game winner, Cornwall had a goal disallowed on an offside call.

Charles Lachance tipped home William Lacasse’s shot from the point with 8:36 to play in the third period to tie the game for Cornwall and send the game to overtime.

Keven Veilleux opened the scoring for the River Kings 67 seconds into the contest. Francois Ouimet sprung Veilleux loose on a semi-breakaway and the towering centre beat Loic Lacasse through the legs.

With Jonquiere on a powerplay, Jonathan Paiement leveled the score with a blast from the point at 18:26 of the first.

Mathieu Brunelle gave the Marquis a 2-1 lead with a breakaway goal on a nifty deke at 5:01 of the second.

Moments after killing off a lengthy two-man advantage, the River Kings went on a 5-on-3 of their own and David Croteau set up Ouimet for a perfect one-timer that beat Lacasse at 9:57 of the middle frame.

Then, Anthony Stewart pounced on a huge rebound and buried a shot past Lavigne only 33 seconds into the third to give Jonquiere a 3-2 lead.

GAME 3: The Marquis scored five straight goals in the third period en route to a 5-4 victory over the River Kings on Friday night in Game 3. Cornwall built a 3-0 lead after 40 minutes of play on goals by Nicholas Pard, Ouimet and Nicolas Larocque-Marcoux. But Jonquiere took over in the third, to the delight of the 1,961 fans in attendance. Peter James Corsi led the Marquis attack with a two-goal performance. Eric Satim scored with 24 seconds to play for Cornwall, but it was too little too late. Charles Corsi made 28 saves but was tagged with the loss in goal for the River Kings.