Alkaline Entertainment powers it up again…

by Editorial Board
in News and Announcements
Reading Time: 121 mins read
18 1 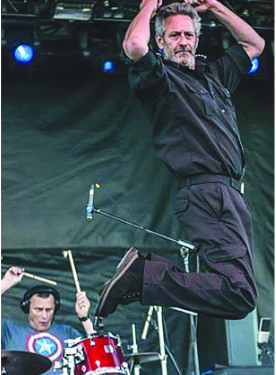 Local concert promoter, Jeff Brunet, (seen left) of Alkaline Entertainment, has been working hard to step up the Cornwall music scene by bringing some great bands to our Seaway city.

Jeff, who has been in the music scene for 25 years, started off as a roadie and then moved to Ottawa where he booked bands for a bar called Barrymore’s. It wasn’t long before Jeff realized that he could start booking bands for his own venues and he has been very busy “powering up” events in Cornwall over the last few months. I know as I design all his posters and tickets and must say that I enjoy working with him and also getting to know the bands that he promotes.

Alkaline Entertainment is bringing International Recording Artist The Box to La Maison in Cornwall on Saturday, April 23rd and I had the pleasure of interviewing lead singer Jean Marc Pisapia (jumping in photo below) and here are my

1. What is the origin of your name “The Box” and what genre of music do you consider your work to be. Also who are your major influences?

Our very first guitar player came up with the idea of calling us The Box and I kind of liked the mystery aspect of it, like an old box tucked away in an attic full of surprises…. You never knew what you would find in that box! The same applies to us really in that we always come up with unexpected stuff both musically and lyrically. One song would recount a murder story (L’affaire Dumoutier / Say To Me) and the next would be an observation on everyday life (Ordinary People) and another yet would simply be an up-lifting track (Closer Together) and so on… That’s why I always thought the best way to describe our music was to call it “Radio Pop” since all of these tracks and many others became instant radio hits.

2. Who are the band members and how long have you known each other. Also how did you meet?

The actual band members are the second incarnation of The Box and have been the same people since 2004 (12 years already!!) I’m the only surviving original member of the band! I’ve met them all while working the Montreal scene at different levels, be it the advertising world (I wrote in excess of 400 jingles since 1996) or the studio session community where some of them operated on a regular basis. This actual line-up is the steadiest The Box has ever been. Back in the ’80s, musicians kept coming in and out, some of them having difficulties coping with the constant touring and all… We are now six on stage: François Bruneau; guitars Dan Volj; bass Martin Lapierre; drums Guillaume Jodoin; keys Isabelle Lemay; vocals and myself… We all get along just fine and it shows whenever we perform live.

3. What are your major accomplishments to date and will there be any new releases in the future?

Our constant presence on the Canadian scene with countless awards nominations and wins, 9 consecutive hit songs, working our way to the legendary Montreal Forum in a mere five years and of course our hit-song “Temptation” in Europe in 1990… All in a 10 year period is quite a feat! But it also took it’s toll by squeezing every drop out of that lemon to an exhausted breakup in 1992. Reforming the group in 2004 (with 3 album releases since) was also a major challenge given the ever changing nature of the record business. But we do it for entirely different reasons now, fun being the main motivation for us. We’re out of the rat race now and have no intentions to get back in; so while I have no plans for future recordings yet, the door is never closed either.

4. Not only are you the lead singer of the band but you also have a very artistic side to you. Please tell us about what you love to do other than write songs and perform.

My new thing is painting actually! I started that after having left Montreal to live in the country (Mont Tremblant) and quickly progressed to a professional standard. Other artists around the area (mostly Montreal expats themselves) took notice and invited me to join in two different collectives which I help run in the form of two art galleries near the ski and golf resort. Although painting is relatively new to me, I found the whole frame of mind and process to be exactly the same as that required to write songs. And as with The Box, I keep changing subjects and exploring new styles as I go. Just Google me up and check it out!

5. What advice do you have for people who want to form a band and enter the music industry at this point in time?

I’ll tell you what: take five different “experts”, put them in a room and ask them how to be successful in today’s music business and you’ll get five different if not downright contradictory answers. Nobody knows how this ever changing business works anymore. But two things haven’t changed: getting along with a group of people and writing a song that’ll appeal to people’s heart. Those have been the same ever since the dawn of times! And Youtube is full of good advice by songwriters who will provide tips on how to write a solid track. So just get in there and check them out. The information is at your fingertips so there’s no excuse for not reaching out.

I know I said 5 questions but AS ALWAYS, I do have one more… What should music lovers in Cornwall expect to hear and see when they come to see you perform at La Maison on Saturday, April 23rd?

Ha ha! Why all the old hits of course!! And newer material too in the first half of the show… One thing is for sure: once this party gets going, there’s no looking back! And believe me, this band is a ton of fun to watch live as we’ve been honing this show for the last 12 years!

RBC Partners with the RRCA for Earth Day!