WHAT A BUSY WEEKEND IT WAS…

by Khyle
in News and Announcements
Reading Time: 2 mins read
10 0 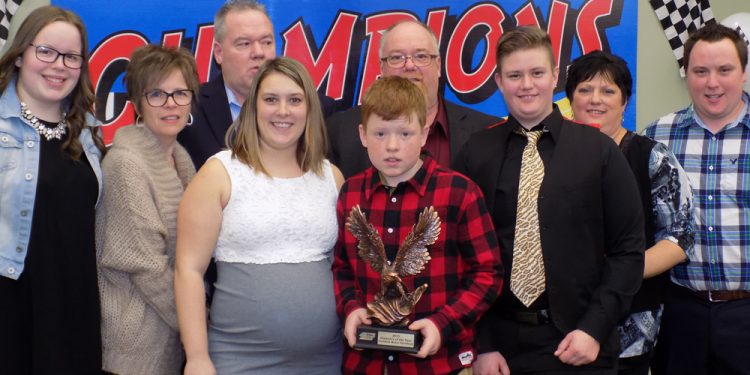 Article and Photos by Mai-Liis Renaud

Around 250 people gathered at the Stormont Community Hall in Long Sault on Saturday, April 2nd to attend the Cornwall Motor Speedway Annual Stock Car Awards Banquet and Dinner, to honour participants of the 2015 racing season.

The following Awards were given and here are the top drivers for each.

Congratulations to all the drivers and

I was so happy to see Rick Young receiving the Mitchell Jock Merit Award for his countless hours that he spends taking photographs at the Cornwall Motor Speedway each racing season. Here the photo I took of Rick, camera in hand as always, waiting to see who the recipient of the award would be, then the interview where he said “I was gobsmacked!” and the photo with the award and the family who sponsors the award.

Congratulations to the owners of the track, the Lavergne family on their 2015 DIRT Motorsport Promotor of the Year Award.

Now we’re all looking forward to the 2016 Racing Season,with 18 organized events, starting on May 15th. and the racing fans I’m sure, will be thrilled with the great improvements that have been made
at t

and the other event that I visited over the weekend was the Cornwall and area Chamber of Commerce Spring Home & Leisure Show. This event always signals that “Spring has finally sprung” although I’m wondering about that with the weather that we have been experiencing for the last couple of days!

However, thousands “came in to the outdoors” and went through the three day show which started on Friday, April 1st to check out everything from camping trailers, boats, landscaping ideas, spas and
hot tubs and much, much more.