by Editorial Board
in News and Announcements
Reading Time: 4 mins read
69 0 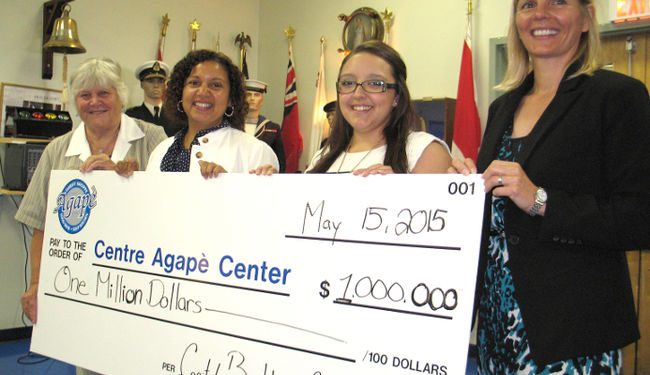 Cornwall, Ontario – Alyssa Blais resigns as Executive Director of Agapè Centre to travel and trek the globe
The past five and a half years have certainly been an adventure for Alyssa Blais, but now it’s time for a new chapter.

“I set out to do something at Agapè and I accomplished my goals. I feel like my time has come to an end, and I’m leaving it in great hands,” said Blais.

The 44-year-old significantly contributed to the organization’s success, notably overseeing an important shift within the non-profit towards improving the quality of food distributed, earning the Agapè Centre formal recognition as a Good Food Organization. Blais also planted a fruit forest, introduced a kid’s cooking program called Curious Chefs, and brought two new fundraising events to the organization: Coldest Night of the Year and Canstruction Cornwall.

Outside the office, Blais ran for city council in 2014 and graduated from St. Francis Xavier University’s certificate in the Canadian Women’s Foundation (CWF) Leadership Institute in 2015.

But the accomplishment she’s most proud of is the successful building campaign she and her team carried out last year, renovating the 27, 000 square foot building into a safer, more accessible space.

“Working with Bourgon Construction, and seeing the progress of a crumbling building turning into a place where people can come and feel comfortable was something special. There’s a sense of peace that wasn’t here before. We dusted off this building and made it into a beautiful and safe place. It’s our home and people are happier here now,” she said.

An avid scuba diver, Blais likened the process to finding treasures out in the St. Lawrence River.

“When you find a cannon ball in the water, it’s full of crust, it’s gross and grey. But when you polish it all off, it’s beautiful and shiny and something you’re proud to share with others,” she said. “It was a huge learning experience.”

After owning and operating an organic farm, and then working at the city for four years, the opportunity to be director of an organization that feeds people called to Blais in 2010.

“I have a very deep connection with food, and I believe everybody should eat well. I thought it would be lifechanging, and it was,” she said.

Blais describes being the leader of the local food bank/community kitchen/thrift store as one of the hardest but also one of the most enriching experiences of her life.

“It really opened my eyes to a lot of different things that I never would have seen – even just the issue of poverty alone,” she said. “I’ve never experienced it in the way that some people have, and you don’t realize it until you’re in it.”

The executive director says she’s happy with what she’s done during the past five and a half years, but it’s time for new leadership.

“We’ve built a good team here. I feel good about leaving it now,” she said.

Knowing Blais’s love of all things outdoors, Johanne Gauthier, operations manager for the non-profit, commented on the departure using a camping metaphor.

“You always try to leave a campsite in better condition than when you first come upon it. I think Alyssa can leave in peace knowing that she has left the Agapè Centre a much stronger organization than when she was first hired,” said Gauthier.

Jim Healey, Chair of the Agapè Centre’s board, expressed his sadness at the loss of Blais’s leadership as executive director, but understands her desire to spread her wings and explore the world.

“Alyssa has provided stability and direction to the running of the Agapè Centre that will be missed,” Healey said. “The Board wishes Alyssa a well-deserved rest and great success in all of her future endeavors.”

What’s next for Blais? She plans on taking a sabbatical for 6 months to a year, and traveling to Newfoundland, Nepal, Thailand, and beyond.

“I want to trek and do some serious hiking. I want to experience different cultures and see how others live and enjoy life. I want to visit Dr. Shiva’s organic farm in India,” she said. “This is the first time in my life where I can really experience the world in a different way, and I would like to do it before it’s too late.”

But first Blais will enjoy her time off in Cornwall this summer with her daughter (student at University of Guelph), scuba diving, painting and competing in triathlons.

The executive director’s last day will be May 26, 2016, and the Agapè Centre’s board members will announce recruitment plans soon.

“I want people to recognize that we have hunger in our community and it’s not going to go away. The Agapè Centre is an important resource and service, and I want to see it at the forefront to alleviating poverty in this community,” said Blais.