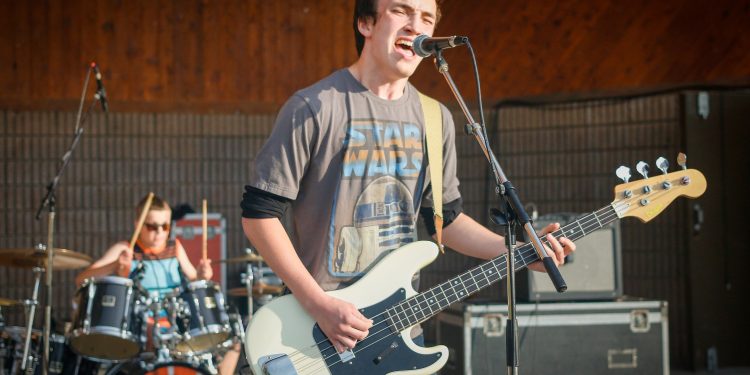 Cornwall Ontario – Twenty years ago the Barstool Prophets were the biggest band to come out of Cornwall Ontario, and now the next generation are making a name for themselves, including some of the offspring of that iconic rock band.

Singer-songwriter Fraser Tamas, daughter of Barstool Prophets drummer Bobby Tamas, was recently honoured with the Artist of the Year Award at St. Mikes.

“It means a lot to win that award. It’s nice to be recognized for all the work you put in. It was also a really big surprise!” said Tamas.

Fraser Tamas doesn’t have any Cornwall shows planned at the moment, but she will be playing the Whistlebear in Waterloo Ontario for Canada Day.

However Fraser isn’t the only chip off the old Barstool Prophets block playing an outdoor concert this summer.

Liam Greer and Ben Greer, sons of Barstool Prophets singer and guitarist Graham Greer, will be playing the Youth Showcase at Arts in the Park this summer.

Both are members of Sevengate, a 3 piece hard rock band consisting of Hunter Delorme on guitar, Ben Greer on drums, and Liam Greer on bass and vocals.

They will be playing a free outdoor concert on Tuesday August 23rd at 6:30pm in Lamoureux Park at the Lions Club Bandshell. They’ll be sharing the stage with Whiskey Hotel, Black Diamonds, and Put It In Park.

“Playing Arts in the Park again is super exciting! Last year we drew a crowd of around 200 with the Black Diamonds, and we’re hoping to at least match that! We’re working on some original tunes, and we’re looking to unveil a few at Arts In the Park, so watch out for that!” Liam remarked.

He is also happy to be sharing the stage with his little brother.

Liam Greer has been enjoying his experience at the University of Ottawa, and exploring the music community there.

“I have jammed with a few people in Ottawa and have played coffee houses and open mics with just my acoustic guitar. I have a group of guys that I’m talking to who live there and we’re looking to start a band in September. I love the Ottawa music scene! There’s a ton of stuff downtown to watch! I’m really into metal and punk so going to a lot of underground shows at Mavericks was awesome,” Liam stated.

Liam Greer is taking English Literature at the University of Ottawa with he goal of becoming a Special Education Teacher.

“My first year at Ottawa U was excellent! I always had a love for literature, whether it was books, poetry, or song lyrics. It was a great learning experience and I loved the city of Ottawa. I am glad to be back in Cornwall though, I missed the familiar faces and it feels good to be back where I grew up,” Liam concluded.

Music isn’t the only artistic pursuit from these Barstool Prophets progeny.

Cameron Forrester, son of Barstool Prophets bassist Glenn Forrester, has a passion for photography and he has experience sound programming at shows and festivals.

“I’ve been doing sound in the area, stage managing and patching at shows and festivals like Westfest in Ottawa, Canada Day in Cornwall, and I did Lift-off way back and doing shows in places like Petawawa and area. I’ve also started a small photography business doing nature and sports work out doors, studio portrait and product shooting and aerial drone photography, Cameron explained.

Fraser, Liam, Ben, and Cameron are all becoming integral parts of their respective music and artistic communities. The next generation are here and they are making an impact.